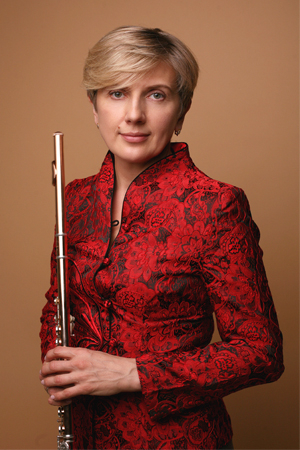 Born in Moscow. Graduated from the Gnesin Middle Special School of Music (classes of Nadezhda Seleznyova, Mikhail Kashirsky and Alexander Korneyev) and the Moscow Conservatory (1994) where she also undertook an assistant-traineeship (1996, class of Yuri Dolzhikov), subsequently taking a postgraduate study at the Hochschule für Musik und Theater “Felix Mendelssohn Bartholdy” in Leipzig (2004), where she studied authentic performance on the transverse flute under Benedek Csalog. From 1996–2000 she participated in master-classes conducted by András Adorján, Michael Kofler, Wilbert Hazelzet, Konrad Hünteler and Barthold Kuijken among other flautists. From 2002–2004 she was a grant-recipient of the German Academic Exchange Service (DAAD).

Since 1997 she has taught contemporary and early flute at the Moscow Conservatory (faculty of contemporary and historical performance) and has been a senior lecturer since 2005. Since 2005 she has also taught at the Gnesin Middle Special School of Music. From 2010–2011 she was a professor at the Kurashiki Sakuyo University (Japan).

One of the founders and organisers of the annual Gnesin Academy International Summer School. Runs master-classes in various regions throughout Russia as part of the project A Class from the Maestro, organised by the charitable foundation Art, Science and Sport, the New Names foundation and the Yuri Rozum International Charitable Foundation. Regularly teaches at the “Sirius” education centre (Sochi), the summer school Forum for Flute and Piano in Diekirch (Luxembourg) and the International Adams Festival in Ittervoort (The Netherlands). Ivusheikova’s students include prize-winners at international competitions and soloists from Russia’s leading orchestras.

From 1990–1993 she was a soloist with the Moscow Bach Centre Orchestra, from 1992–1994 she was with the “Ostankino” Moscow Radio and Television Symphony Orchestra, and since 2004 she has been with the Pratum Integrum early music ensemble, performing on authentic instruments. Frequently performs in concerts throughout Russia and internationally. Has appeared alongside Alexander Rudin, Jacob Katsnelson, Alexei Utkin, Tatiana Grindenko, Alexei Lyubimov, Felix Renggli, Paolo Grazzi and Wieland Kuijken among other musicians.