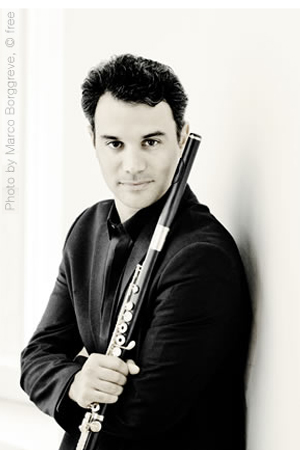 After holding the position of principal flute of the prestigious Los Angeles Philharmonic under Gustavo Dudamel, Julien Beaudiment is today principal flute of the Orchestre de l'Opera National de Lyon and professor at the Conservatoire National Supérieur de Musique de Lyon. He has also held the same position with the BBC National Orchestra of Wales in Great Britain.
Originally from La Rochelle and Bordeaux, he crossed the English channel at the age of 18 to study at the Guildhall School of Music and Drama in London with Paul Edmund-Davies and Averil Williams. He subsequently entered the Conservatoire National Supérieur de music de Paris (classes of Sophie Cherrier, Vincent Lucas, and Michel Moraguès).

He has accompanied the choreographers Régine Chopinot and Benjamin Millepied playing Bach as a soloist and expanded its activities by recording in the studio during his American years in Los Angeles for the series Doctor Who and Battle Star Galaktica, as well as working with the actors Seth Macfarlane and Julie Andrews, the pop stars John Legend, Antony and the Johnsons, and Ruben Blades.

Teaching occupies a prominent place in his agenda. After having been the artistic deputy of José Daniel Castellon's flute class at the Haute Ecole de Musique de Lausanne in Switzerland, it is today the teacher of the flute class of the Conservatoire National Supérieur de Musique in Lyon. He is also a visiting professor at the Pole Supérieur de Musique de Bordeaux, as well at the Talent Music Masters of Brescia in Italy.