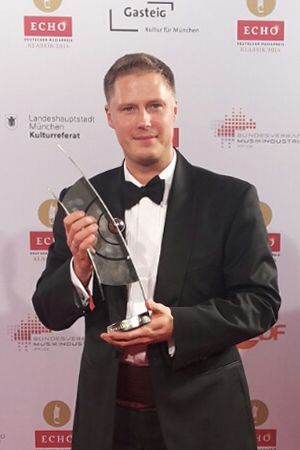 Artem Chirkov was born in Leningrad. Graduated from the St Petersburg State Rimsky-Korsakov Conservatoire (class of Riza Gimaletdinov), subsequently studying in Munich under Klaus Trumpf. Recipient of 1st prizes and grand-prix at major double bass competitions in Germany, the Czech Republic, the USA and Switzerland. Won the Grand-prix at the International Jeff Bradetich Foundation Competition in Dallas, which British music magazine The Strad has likened in terms of significance to the International Van Cliburn Piano Competition.

In October 2014 as a member of the Bassiona Amorosa double bass quartet he was named a recipient of an ECHO Klassik award in the category “Classics without Borders”. He featured in a recording of the album Triumvirate (Ravello Records), which has been nominated for a Grammy award in 2015.

He is currently leader of the double bass section and a soloist with the St Petersburg Philharmonic. Regularly gives recitals in Russia and abroad.