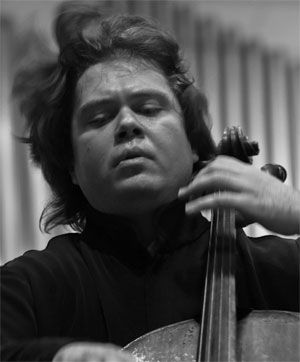 Cello
One of the most compelling and charismatic Russian musicians of the next generation, Evgeny Rumyantsev blends dazzling virtuoso skill and depth of interpretation with his powerful temperament and innovative cello sound. With his staggeringly universal artistic approach, he has succeeded in combining performances with various orchestras and recital appearances in chamber music along with highly diverse ensembles. His skill as a musician received the approbation of Mstislav Rostropovich, at whose public tutorials the young cellist frequently performed.

Evgeny Rumyantsev was born in Moscow in 1984. Having begun to learn the cello at the age of eight, he continued to study music at the Central School of Music of the Moscow Tchaikovsky Conservatoire. He graduated from the Moscow Conservatoire in 2007, and in 2010 he undertook a postgraduate study under Professor Natalia Shakhovskaya, People’s Artist of the USSR. Rumyantsev has been a grant-recipient of and participated in various programmes run by the Vladimir Spivakov Foundation, the Mstislav Rostropovich Foundation (Nikolai Myaskovsky Grant) and the Russian Performing Arts Foundation. He has taken master-classes from Mstislav Rostropovich, David Geringas, Eberhard Finke and Sergei Roldugin.

The musician’s repertoire includes almost the entire solo and chamber music repertoire composed for cello. Rumyantsev has recorded on CD, television and radio. He has taught at the Moscow Conservatoire since 2010 in addition to running master-classes in Russia, Europe, Japan and South Korea. Since 2012 he has collaborated with the agency Art-Brand. He is currently a soloist with the St Petersburg House of Music and Gosconcert and a member of the Association of Prize-Winners of the Tchaikovsky International Competition and the International Union of Music Workers. In 2012 Evgeny Rumyantsev was invited to join the jury of the Symphony international competition (Volgograd).