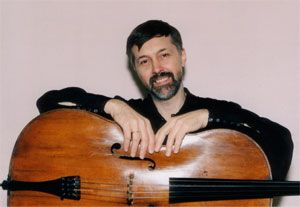 Cello
Ivan Monighetti is one of the plethora of star cellists who emerged from the Rostropovich school. His path to international stardom opened up after he won at the Pyotr Tchaikovsky International Competition. Performances at major contemporary music festivals earned him a reputation as a specialist in this field, while his friendships with such composers as Penderecki, Xenakis, Schnittke, Gubaidulina, Knaifel and Silvestrov have always provided him with fresh creative impulses.

Ivan Monighetti is also an acclaimed authority on the performance of 18th and 19th century music. For several seasons Ivan Monighetti has directed the International Early Music Festival in Moscow and the Camerata Boccherini ensemble. Following his debut at the Haydn Festival in Great Britain, Monighetti has also begun to emerge as a conductor. Swiss television has produced two documentaries about Ivan Monighetti and St Petersburg television dedicated a programme to him as part of the series The Tsar’s Box. Ivan Monighetti is also a professor at the Musik-Akademie Basel. His students have included such renowned soloists as Sol Gabetta, Nicolas Altstaedt, Emil Rovner and Asier Polo.

Since 2010 he has been Artistic Director of the Viva Cello international festival in Basel.