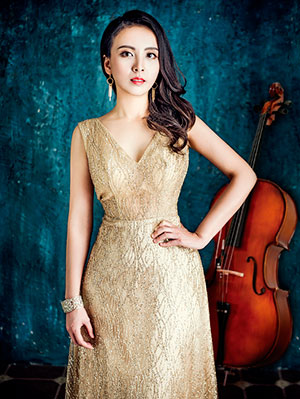 Chiao-Hsuan Kang was born in Taichung (Taiwan) and began her cello studies at the age of six. She earned her master’s degree from the University of Cincinnati College-Conservatory of Music )class of Lee Fiser) and her doctoral degree from the Louisiana State University with full scholarship (class of Dennis Parker).
Almost immediately after gaining her doctoral degree, she started to teach cello at the Ludong University School of Arts. She is also a cello professor at the Central China Normal University School of Music.
Chiao-Hsuan Kang appears frequently as soloist with orchestras such as the China Broadcasting Chinese Orchestra, Suzhou Chinese Orchestra and Hunan Symphony Orchestra. She has enjoyed successful collaborations with distinguished conductors such as Pang Kapang, Carlos Riazuelo, Sun Xun, Zhonghui Dai and many other well-known conductors. She has performed at the National Centre for the Performing Arts in Beijing, National Concert Hall in Taipei, Hunan Concert Hall and Suzhou Concert Hall, to name just a few. Chiao-Hsuan Kang has researched extensively on the works of the well-known Chinese-American composer Bright Sheng.
Information for February 2019