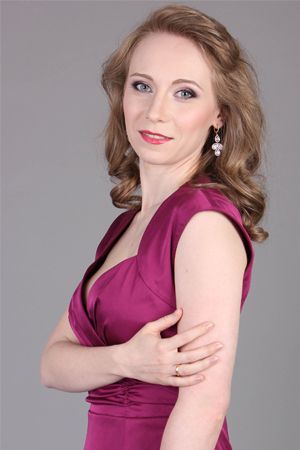 Born in St Petersburg. In 2014 she graduated from the St Petersburg State Rimsky-Korsakov Conservatoire (class of S. A. Yalysheva, Honoured Artist of Russia).

At the theatre of the St Petersburg Conservatoire she has performed the roles of Barbarina and Susanna (Le nozze di Figaro), as well as the role of Marfa in the premiere of a new production of the opera The Tsar’s Bride. At the Cherepovets Chamber Theatre she performed the role of Glavkos in Giovanni Ristori’s opera Arianna.
From 2012-2014 at Smolny Cathedral she performed solo roles in Mozart’s Requiem, Stravinsky’s Les Noces and Orff’s Carmina Burana.
From 2012-2013 she took part in master-classes given by Élizabeth Vidal (France) and Vladimir Chernov, People’s Artist of the Russian Federation).