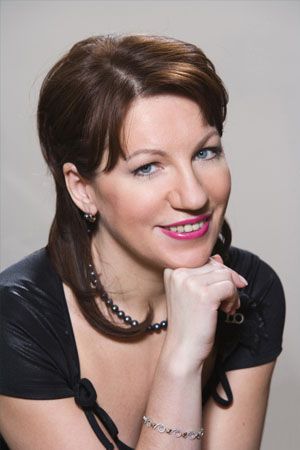 Valeria Stenkina was born in Kuibyshev. Graduated with distinction from the St Petersburg State Rimsky-Korsakov Conservatoire. Began to appear in concerts when still a student in 1989, touring to Moscow with solo recitals (the Rachmaninoff Hall and the Chaliapin House Museum), following which she became a soloist of the St Petersburg Chamber Philharmonic.
The singer won the Grand Prix at the International Vocalists’ Competition in Toulouse in 1990, and in 1991 she was a prize-winner at the Mozart Competition in Salzburg and the Francesc Viñas Competition in Barcelona.
In 1996 Valeria Stenkina was invited to join the Mariinsky Opera by Valery Gergiev, making her debut there in the title role in Richard Strauss’ opera Salome. While on tour with the Mariinsky Opera she has appeared at major opera and concert venues throughout the world.
Valeria Stenkina’s repertoire includes such roles as Violetta (La traviata), Donna Anna (Don Giovanni), Fiordiligi (Così fan tutte), Lady Macbeth (Macbeth) and Elisabeth (Don Carlo) in addition to the title roles in operas including Norma and Tosca. The singer has worked with such outstanding stage directors as David Freeman, Charles Roubaud, Johannes Schaaf and Emilio Sagi.
In 1997 Valeria Stenkina made a highly acclaimed debut at the Accademia Nazionale di Santa Cecilia (Rome) with a concert performance of Salome under Valery Gergiev in addition to performing the role of Kundry in Parsifal (directed by Tony Palmer) in St Petersburg as well as at the Savonlinna Opera Festival (conducted by Valery Gergiev). In subsequent seasons the singer has made debuts with the New Israeli Opera as Salome (first Israeli performance), the Lithuanian National Opera and Ballet Theatre as Norma (conducted by Vytautas Viržonis) and the Estonian National Opera as Elisabeth in Don Carlo (conducted by Paul Mägi) in addition to participating in the Gergiev Festival in Rotterdam (Dmitry Shostakovich’s Song Cycle to Verse by Alexander Blok with Alexander Slobodyanik, Sviatoslav Zagursky and Ilya Grubert.
Over the seasons from 1999–2004 Valeria Stenkina has performed at the Festspielhaus in Baden-Baden, the National Opera in Seoul and the Melbourne Opera. Valeria Stenkina is also renowned as a recitalist – she has collaborated with conductors including Mariss Jansons, Alexander Dmitriev, Uriel Segal, Michel Plasson and Vladimir Minin as well as Mstislav Rostropovich (appearances at the Great Hall of the St Petersburg Philharmonic as part of the Dmitry Shostakovich Festival in February 1998, in Tokyo and at the Cellists’ Congress in St Petersburg in 1999). The singer has performed soprano roles in Mozart and Fauré’s Requiems, Stabat Mater by both Pergolesi and Rossini, Rossini’s Petite Messe solennelle, Mahler’s Fourth and Eighth Symphonies and Richard Strauss’ Vier Letzte Lieder with various St Petersburg orchestras and the Israel National Orchestra.
In the course of these seasons she appeared in recitals and recorded CDs with acclaimed Russian pianist Iosif Lifschitz (Sony and Melodiya).
2005 saw the singer make successful appearances at the Bilbao Opera (Spain) as Salome (conducted by Juanjo Mena) alongside с Robert Hale and Anne Gjevang. This was followed by her debut at the Bolshoi Theatre in Moscow as Sieglinde (Die Walküre) and Gutrune (Götterdämmerung). The same year, the singer featured in a performance of Rossini’s Petite Messe solennelle at the Great Hall of the Moscow Conservatoire under Vladimir Minin. In January 2006 Die Walküre and Götterdämmerung were performed in Tokyo (conducted by Valery Gergiev).
In 2006 Valeria Stenkina made acclaimed appearances at the Kiev Opera and the Great Hall of the Moscow Conservatoire in Die Walküre with Bryn Terfel as Wotan and Valery Gergiev conducting; she performed the role of Fiordiligi in a concert performance of Così fan tutte at the Mariinsky Theatre (conducted by Manfred Honeck). The singer again appeared in the tetralogy Der Ring des Nibelungen, performing on Mariinsky Opera tours to Baden-Baden, Los Angeles and the Canary Islands. In November 2006 she performed the role of Sieglinde in a concert performance of Die Walküre at the Zaragoza Concert Hall and at the Gran Teatre del Liceu in Barcelona.
In July 2007 Valeria Stenkina made her debut at the Metropolitan Opera (Die Walküre and Götterdämmerung).
The singer’s solo engagements have included concerts in Spain with Iosif Lifschitz, a concert with a symphony orchestra, recitals in Guatemala and Antigua (conducted by Julian Galant) and appearances at the Grieg Festival in Oslo, the Marbella Festival (Spain) with Sergei Leiferkus, the Colmar Festival, the Montecatini Festival, the Virtuosi Recife international festival in Brazil and Pushkin-House in London among others.
From August 2009 to July 2011 she was a soloist with the Norwegian Royal Opera in Oslo. In September 2009 Valeria Stenkina made her debut as Rusalka (Dvořák’s Rusalka; conducted by Edwin Gilbert Jense and Thomas Weiss, directed by Paul Curran) before taking on the role of Ariadne (Richard Strauss’ Ariadne auf Naxos in January 2010; conducted by John Fiore, directed by Martin Duncan). In December 2010 she made a debut as Tatiana in Eugene Onegin (conducted by Edwin Gilbert Jense, directed by Jakub Korčák).
The singer frequently performs programmes of chamber music including works and song cycles by such composers as Mozart, Schubert, Schumann, Wolf, Richard Strauss, Brahms, Mahler, Berlioz, Granados, Glinka, Tchaikovsky, Dargomyzhsky and Rachmaninoff. Works with the outstanding pianists Iosif Lifschitz, Igor Uryash, Peter Laul, Inga Dzetsker, Daniel Zaretsky and Oleg Wainstein.
Over the course of her career, each season the singer has performed at such fabled St Petersburg venues as the Small and Great Halls of the St Petersburg Philharmonic, the State Cappella and the Hermitage Theatre in addition to undertaking tours of Russia.
Plans for the current season include recitals in New York and London.