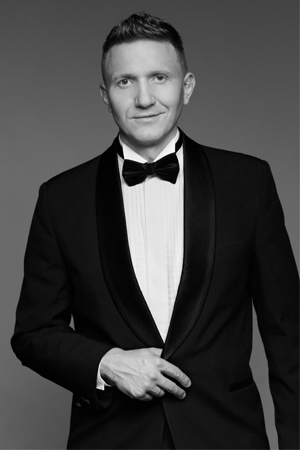 Petr Sokolov was born in Irkutsk. In 2015 he graduated from the Gnessin Russian Academy of Music (class of Professor Alexander Naumenko).

From 2012 he was a soloist at the Natalia Sats Children’s Musical Theatre. From 2016–2018 he was a soloist with the State Academic Symphony Capella of Russia and the Stanislavsky and Nemirovich-Danchenko Moscow Music Theatre.

Repertoire includes the title roles in the operas Eugene Onegin and Don Giovanni and the roles of Escamillo (Carmen), Sharpless (Madama Butterfly), Ibn-Hakia (Iolanta), Don Ferdinand (Betrothal in a Monastery) and Taddeo (L’italiana in Algeri) among others.

Took part in the premiere of a production of Handel’s opera Hercules at the Bashkir State Opera and Ballet Theatre in Ufa. Performed the role of Don Profondo (Il viaggio a Reims) at the Rossini Festival in Pesaro (2018).

In 2019 he made his debuts at the Staatsoper Stuttgart (Yeletsky in The Queen of Spades), the Opera di Roma (Mathias Wiessman in The Fiery Angel), the Theater Dortmund (Figaro in Il barbiere di Siviglia) and the Národní Divadlo theatre in Prague (Humbert in Lolita).

Forthcoming debuts include the role of Rodrigo (Don Carlo) at the Deutsche Oper am Rhein.
Information for February 2020