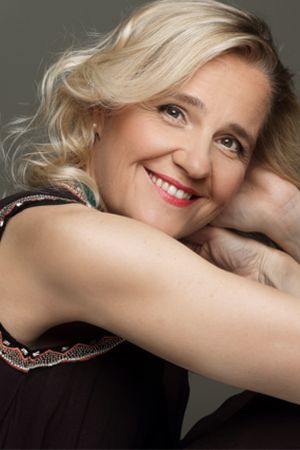 “Komsi’s voice is phenomenal, capable of extremes of pitch and textures beyond the range of most, combined with extraordinarily crisp articulation. Her voice is almost superhumanly elastic,her diction precise even in phrases as convoluted as those thrown at her by Joyce and Eötvös.
Opera Today

Piia Komsi is known for her exceptionally high and flexible voice and virtuoso technique. She is a successful international performer of baroque, classical and contemporary repertoire – not only in opera and orchestral music, but also chamber music and lied. Piia Komsi has been a muse to many contemporary composers. Her latest success has been the lead role of Martha in Fabian Panisello’s Le Malentendu. Komsi made her breakthrough as the Maid in Thomas Adès’ opera Powder Her Face.

Piia Komsi has a strong background in early church music, singing with her twin sister Anu Komsi in the children’s choir of the Kokkola Church, and continuing throughout her professional career – first as a continuo cellist and then as a soprano soloist.

With her background as a cellist (she was a member of the Finnish National Orchestra until 2001) Piia Komsi’s latest challenge is to sing while simultaneously playing the cello. Several composers have already written new pieces for her unique soprano coloratura-cellist combination.

Piia Komsi's recordings include Solaris (Naxos/Proprius, chosen for the best art CD of the year 2012 by Kotimaa), Esa-Pekka Salonen's Wing on Wing (Deutsche Grammophon), Akrostichon Wortspiel by Unsuk Chin (Deutsche Grammophon), From the Grammar of Dreams by Kaija Saariaho (Ondine, chosen as the best CD of the year-prize in YLE), Procris by Wennäkoski (Alba, Emma-Prize 2008), Opera Mothers and Daughters by Tuomela (Aulos), Alice in Wonderland by Unsuk Chin (DVD, 2007), Ahti Karjalainen by Heinz-Juhani Hofmann (Alba 2015).