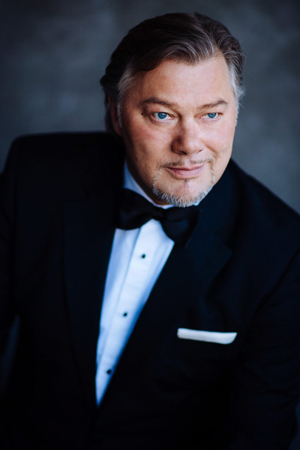 René Pape, one of the present day’s most outstanding basses, has appeared at the Mariinsky Theatre in the role of Gurnemanz in the opera Parsifal. Stately and tall, even majestic, on stage he looked extremely impressive. We heard an exceptional bass voice in terms of the beauty of its timbre, powerful yet gentle, pliant and responsive as a baritone should be: a quality that is all but unknown among Russian basses. This complex role, which demands immense staying-power, was performed by him under Valery Gergiev to the very highest degree of perfection.

A beautiful, diverse and fascinating recital, with Pape deftly switching characters from aria to aria… With Philip’s aria [from Verdi’s Don Carlo], we can compare Pape to a host of basses, among them Chaliapin, Kipnis, Pinza, Christoff, London, Raimondi, Ghiaurov and van Dam. <…> To my ears, Pape sings the most introspective, suffering Philip of all… And his interpretation [of Wagner’s King Marke in Tristan und Isolde] has only grown better and subtler over the years.

Off the stage, René Pape’s own character rather intensifies his resemblance to the personas of his heroes in theatre… We are faced with the impression that – in everyday reality – he is immersed in living his own life to no less an extent than he is in living the lives of other people as he does when on stage. His insatiable nature, as it were, torn to shreds by demons, brings to mind several descriptions of the character of Fyodor Chaliapin, one of the 20th century’s most extraordinary bass singers.

René Pape made his debut at the Mariinsky Theatre in 2005, performing the role of Gurnemanz.

In 2010 the Mariinsky label released the disk Parsifal where the artist sang the part of Gurnemanz.

René Pape has collaborated with such record companies as BMG, EMI, Deutsche Grammophon and TELDEC. In 2004 he took part in the recording of the  Mein Herz brennt song cycle, composed by Torsten Rasch and based on the music by Rammstein adapted for bass-baritone, soprano, chorus, speaker and orchestra (Deutsche Grammophon). In 2008 Pape recorded his solo CD Gods, Kings & Demons on Deutsche Grammophon (for which he received an  ECHO KLASSIK award in 2009); while in 2011 he released a CD with the arias from Wagner’s operas. In 2015 Pape took part in the recording of the opera Macbeth with Anna Netrebko and the Metropolitan Opera Orchestra under the baton of Fabio Luisi.

ARTE made a television film about René Pape within the  Maestro series. Pape has received two GRAMMYs for his recordings (1997, 2002). In 2002 he was named “Vocalist of the Year” by Musical America. In 2007 Pape received an Opera News Award. In 2010 he was also awarded a Met Mastersinger.
Information for June 2021