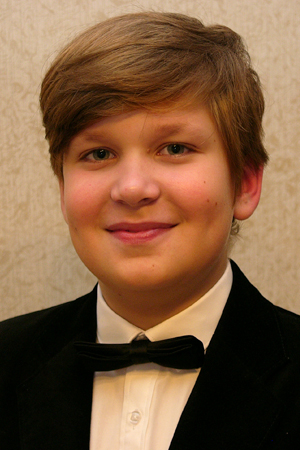 Alexander Palekhov was born in St Petersburg in 2007. At the age of six he began his studies at the Kamerton choral studio of the Palace of Children’s (Youth) Art of the Vyborg District of St Petersburg. With the Kamerton boys’ choir he has been a prize-winner on several occasions at All-Russian and international competitions, and at the VII International Festival and Competition Vivat, Boys! in Petrozavodsk he was awarded a diploma as best soloist. Since 2017 he has studied at the Glinka Choral School (vocals class of Nadezhda Drobyshevskaya), toured with the school’s boys’ choir and performed solo roles.

Since 2016 Alexander has participated in productions at theatres in St Petersburg. Has performed children’s vocal roles in productions of ZERO Liturgy at the Alexandrinsky Theatre, Jekyll and Hyde at the Theatre of Musical Comedy and Tosca at the St Petersburg Chamber Opera Company. At the Mariinsky Theatre he sings in the operas Brundibár, Die Zauberflöte, A Midsummer Night’s Dream, Boyarina Morozova, Pelléas et Mélisande and Tannhäuser.

In his spare time he is engaged in a study of the history of municipal transport and lays out transport routes in cities he himself has thought up.
Information for January 2020