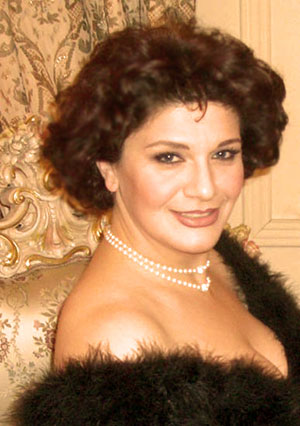 Mzia Nioradze was born in Tbilisi. In 1992, she graduated from the the Vano Sarajishvili Tbilisi State Conservatoire and went on to study at the Accademia d'Arte Lirica di Osimo in Italy. She made her debut at the Mariinsky Theatre as Carmen (Carmen) in 1996. She has since performed all the female lead roles in Verdi’s operas, as well as leading mezzo-soprano and contralto roles in various operas by Russian composers. Nioradze has toured in Israel with the Mariinsky Theatre. In 2000, she took part in a new production of War and Peace at the Opéra de Paris. In 2001, she made her debut as Konchakovna in a new production of Prince Igor at Houston Grand Opera.

She has also appeared as Azucena in Il trovatore at the Metropolitan Opera and the Opéra de Lausanne, Frika (Der Ring des Nibelungen) at the Mariinsky Theatre, Adalgisa (Norma) at the Opéra de Vichy, Ulrica (Un ballo in maschera) and Amneris (Aida) at the Opéra de Nice, Elena, Matriosha and Mavra Kusminichna (War and Peace) at the Metropolitan Opera, and Maddalena (Rigoletto) at the San Francisco Opera. In 2017, Nioradze sang the roles of Princess de Bouillon (Adriana Lecouvreur) and Azucena (Il trovatore) at the Latvian National Opera.

Her repertoire also includes mezzo-soprano roles in Beethoven’s Missa solemnis, Mozart’s and Verdi’s requiems, and Mahler’s Symphony No. 3 and Symphony No. 8. Her discography includes operas War and Peace (2000) and Il trovatore (2007, 2013).
Information for October 2018