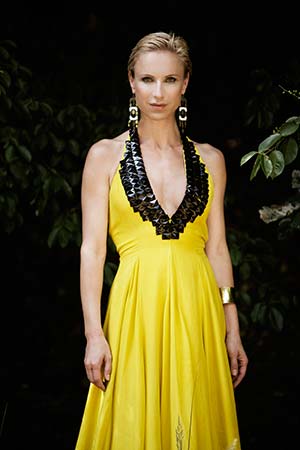 Initially a mezzo-soprano, the “marvellous actress and singer” performed many of the leading mezzo-soprano roles in world’s foremost opera houses, until her triumphant sopranodebut in 2005.
Today, repertoire includes some of the most challenging roles for a dramatic soprano; Cherubini’s Medee, Beethoven’s Leonore in Fidelio, Marietta in Korngold’s Die Tote Stadt, Floria Tosca, Cassandre and Didon in Berlioz’s Les Troyens, and the title role in Richard Strauss’s Salome.

Nadja Michael made her US opera debut in the fall of 2009 in a new production of Salome at the San Francisco Opera. She then returned to the The atre Royale de La Monnaie as Iphigenie in Gluck’s Iphigenie en Tauride. Michael sang Elisabeth and Venus in Tannhauser at the Deutsche Oper Berlin and appearred as Salome in Hamburg. In June of 2010 she starred in the title role of the Bavarian State Opera’s new production of Mayr’s very rarely performed Medea in Corinto. In 2011 she made her debut as Maris in Berg’s Wozzeck at the Berlin Staatsoper. This was followed by her debut in Cherubini’s Médée in 2012 at the Théâtre de Champs Élysées in Paris.

Nadja Michael opened the 2014-2015 season at the Bayerische Staatsoper as Emilia Marty in The Makropulous Affair, followed by performing in Die Tote Stadt as Marietta in both Warszawa and to La Monnaie in Brussels.
In the 2015-2016 season she performed the roles of Kundri (Parsifal) at the Teatro Colon and Ortrud (Lohengrin) at the Mariinsky Theatre, opposite Anna Netrebko and Yevgeny Nikitin.
Information for June 2016