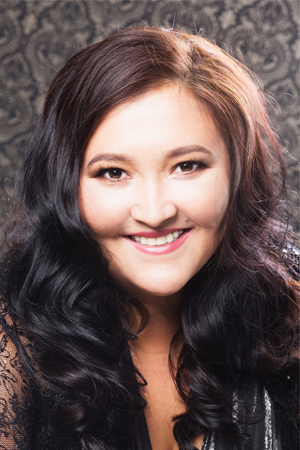 Natalia Muradymova was born in Kamensk-Uralsky (Sverdlovsk Region). In 2003 she graduated from the Ural State Musorgsky Conservatoire (class of Nikolai Golyshev). From 2000 to 2003 she was a soloist at the Yekaterinburg State Academic Opera and Ballet Theatre. Performed the roles of Tatiana (Eugene Onegin), Maria (Mazepa), Pamina (Die Zauberflöte), Micaëla (Carmen), Mimì (La Bohème) and Iolanta.

Took part in the world premiere of Mieczysław Weinberg’s opera The Passenger at the Moscow International Performing Arts Centre in December 2003 (as Marta).

Has performed the role of Princess Turandot at the Udmurtia State Opera and Ballet Theatre and the roles of the Maiden (The Maiden in the Tower by Sibelius) and the Tsarevna (Kashchei the Immortal) at the Opera Apriori festival in Moscow. Appears in programmes of early chamber music run by the organist Anastasia Chertok.

Has toured to Italy, the Netherlands, Germany, Estonia, South Korea and Cyprus.

In 2019 she made her debut at the Mariinsky Theatre, performing the role of Floria Tosca.

Performed the soprano role in Shostakovich’s Fourteenth Symphony at the 5th International Festival of Contemporary Music Concordia in Kazan (2015), and in the autumn of 2016 together with the Tatarstan National Symphony Orchestra under Alexander Sladkovsky she featured in a recording of that symphony (released by the Melodiya label in 2017).
Information for July 2022