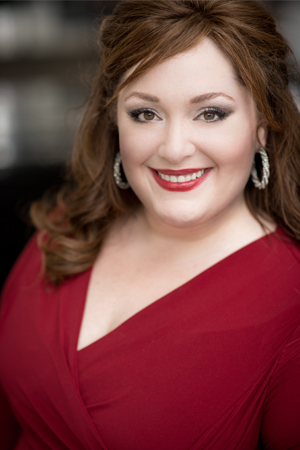 “The Wagnerian voice we have been waiting for since Flagstad and Nilsson”.
La Presse

In the 2017-2018 season, dramatic soprano Heidi Melton will make her role debut as Brünnhilde in a new production of Götterdämmerung at Badisches Staatstheater Karlsruhe followed by performances of the complete Ring Cycle later in the spring. Ms. Melton will also return to the New York Philharmonic as Sieglinde in Act 1 of Die Walküre and with the Dallas Symphony as Brünnhilde in a complete concert performance of Die Walküre, both conducted by Jaap van Zweden. She will sing Mahler’s Symphony No. 8 as the Second Soprano with Tonkünstler Orchester and Andres Orozco-Estrada in Vienna. In New York City, she will sing a recital for the George London Foundation at the Morgan Library.

She recently debuted with the Vienna Philharmonic singing Brünnhilde’s “Immolation Scene” from Götterdämmerung under the baton of Valery Gergiev, both in Vienna at the Musikverein and in New York at Carnegie Hall. She made her New York Philharmonic debut with Alan Gilbert in Strauss Lieder and Act 3 of Die Walküre as Brünnhilde. For the Hong Kong Philharmonic with Jaap van Zweden, she sang Sieglinde in complete concert performances of Die Walküre (also recorded on Naxos). She returned to the Deutsche Oper Berlin as Venus/Elisabeth in Tannhäuser with Donald Runnicles, as well as to Badisches Staatstheater Karlsruhe for her first performances as Isolde in a new Christopher Alden production of Tristan und Isolde conducted by Justin Brown. Heidi Melton debuted at the English National Opera in a new production of Tristan and Isolde conducted by Edward Gardner. Notable symphonic engagements include her Italian debut under Kirill Petrenko with Orchestra Sinfonica Nazionale della RAI in Torino as Gutrune/Third Norn in a concert performance of Götterdämmerung; BBC Proms as Elisabeth in a concert performance of Tannhäuser with Donald Runnicles and the BBC Scottish Symphony Orchestra; Dallas Symphony under Jaap van Zweden, BBC Scottish Symphony under Donald Runnicles, and Montreal Symphony Orchestra with Kent Nagano in Act 1 of Die Walküre; the Baltimore Symphony in Act 1 of Die Walküre and Isolde’s “Liebestod” under Marin Alsop and Four Last Songs with Markus Stenz; the Netherlands Radio Philharmonic Orchestra in Eine Lebensmesse; at the Festival de Lanaudière singing Elsa in Lohengrin under Yannick Nézet-Séguin with Orchestre Métropolitain; at the Aspen Music Festival under Robert Spano in Mahler’s Symphony No. 8; Real Filharmonía de Galicia in Wagner’s Wesendonck-Lieder; and in Verdi’s Messa da requiem for Donald Runnicles’ farewell concert as Music Director of San Francisco Opera.
Information for June 2018