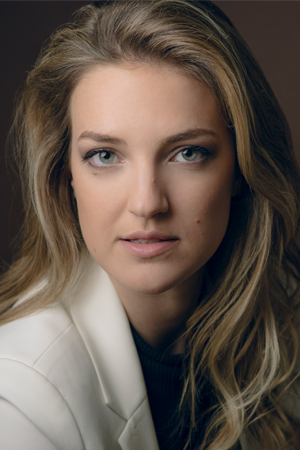 Born in Valencia in 1994, Marina Monzó started her piano studies, flute and singing at the Conservatory of Music “Joaquín Rodrigo” of Valencia, graduating in 2019. She attended numerous masterclasses with artists such as Mariella Devia, Renata Scotto, Daniela Dessì, Juan Diego Flórez and Raúl Giménez. Since 2014 she has studied regularly with the soprano Isabel Rey. Her repertoire includes titles by Bellini, Donizetti, Mozart, Rossini and Verdi.

In September 2015 she took part in a gala at the Teatro Real in Madrid, where she shared the stage with singers like Juan Pons, Gregory Kunde, Carlos Álvarez, Isabel Rey.

In 2016 she debuted in the ABAO Bilbao Opera, interpreting the roles of Amina and Lisa in La sonnambula. That year she joined the Accademia Rossiniana (Pesaro) under the guidance of maestro Alberto Zedda, where she even debuted in Il viaggio a Reims, in the role of La Contessa di Folleville. From that moment she sings with the tenor Juan Diego Flórez in different concerts.

Subsequently she debuted at the Teatro de la Zarzuela with Le Cinesi, appeared in Il viaggio a Reims (La Contessa di Folleville) at the Teatro Filarmonico in Verona, in Werther (Sophie) in Las Palmas, in Un ballo in maschera (Oscar) in La Coruña, in La favorita (Ines) at the Teatro Real, she was back to the Rossini Opera Festival with La pietra del paragone (Donna Fulvia). She sang in Naples with Rigoletto and in Florence with Don Pasquale.
Information for June 2021