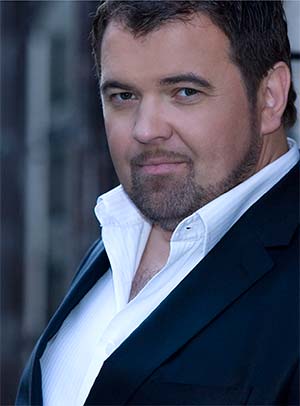 ... And of course the effect is powered by the voice of such a tenor as Kristian Benedikt (Otello), with beautiful colour and a dark and powerful ring, which has extensive guarantees of temperament and quality.
Corriere della sera
Tenor

Lithuanian tenor Kristian Benedikt began his career at the National Opera of Vilnius, Lithuania, where he has sung more than twenty roles. Although he began his career as a lyric tenor, in recent years Kristian Benedikt has established himself as one of the world’s most promising and exciting dramatic tenors of his generation.
In April 2013 Benedikt made an acclaimed debut at Bayerische Staatsoper in Munich as Otello – a role he has also sung in Modena, Piacenza, Cagliari and Yekaterinburg and will sing in Vilnius (2013-14), Santiago (July-August 2014) and Basel (2014-15). Other engagements for the 2013-2014 season include the title roles of Ernani, Lohengrin and Otello as well as the roles of Eléazar (La Juive), Radames (Aida), and Don José (Carmen).
His operatic repertoire moreover features some of the most demanding roles, such as Manrico (Il trovatore), Cavaradossi (Tosca), Canio (I pagliacci), Giordano (Andrea Chénier), Siegmund (Die Walküre), Calaf (Turandot), the title role in Rienzi and Dick Johnson (La fanciulla del West). At the same time, he also continues to sing more lyric roles, such as Edgardo (Lucia di Lammermoor), and Hoffmann in Les Contes d’Hoffmann. As a guest soloist, Benedikt has sung at such prestigious venues as the Bayerische Staatsoper in Munich, the Mariinsky Theatre in St Petersburg, the Royal Opera in Copenhagen, the Finnish National Opera in Helsinki, the Dutch National Opera in Amsterdam, the Estonian National Opera in Tallinn, the Gran Teatre del Liceu in Barcelona and theatres in Piacenza, Modena and Cagliari in Italy.
His international breakthrough came in 2002 with Munich’s Rundfunk Orchestra where he recorded Ponchielli’s La Gioconda with Marcello Viotti and Plácido Domingo. In 2004 at the Nederlandse Opera he sang in Verdi’s Don Carlo under Riccardo Chailly. Other highlights include Don José (Carmen) in 2005 at the Mariinsky Theatre and Canio (I pagliacci) in 2006 at the Estonian National Opera in Tallinn. From 2007 to 2009 he was a regular guest soloist at opera companies throughout the Baltic States in roles such as Hoffmann (Les Contes d’Hoffmann), Cavaradossi (Tosca), the Duke (Rigoletto), Manrico (Il trovatore) and Alfredo (La traviata).
In 2009 he made his debut in Verdi’s Requiem with the European Union Choir and the 2009-10 season saw important debuts in four roles as Andrea Chénier, Des Grieux (Manon), Corrado in Ponchielli’s I lituani and Pinkerton (Madama Butterfly). In 2010-11 he sang to great acclaim as Eléazar (La Juive), the title role in Otello, Turiddu (Cavalleria rusticana), and Calaf (Turandot) at opera houses in Russia, the Baltic States and at the Danish Royal Opera. He also appeared as Don José at an opera festival in Sweden.
Last season Benedikt made his debut as Edgardo (Lucia di Lammermoor) in addition to numerous concerts and performances as Otello, Eléazar, Jose, Des Grieux, Manrico and Siegmund (Die Walküre) at various opera houses. He also performed as Dick Johnson (La fanciulla del West) at the Finnish National Opera. On the concert platform, Kristian Benedikt has sung Dubois’ Les Sept Paroles du Christ, Rossini’s Stabat Mater and Verdi’s Requiem amongst other works. He has also taken part in several oratorio performances, such as Handel’s The Messiah, Mahler’s Das Lied von der Erde, Rachmaninoff’s The Bells and Weber’s Requiem.
Benedikt has sung under the baton of numerous renowned conductors, among them Marcello Viotti, Riccardo Chailly, Alberto Hold-Garrido, Maurizio Barbacini, Paolo Carigniani, Asher Fisch and Giampaolo Bisanti in addition to collaborating with the great stage directors Willy Decker, Dmitry Bertman, Arnaud Bernard, Eimuntas Nekrošius, Pier Francesco Maestrini and Igor Uschakov.