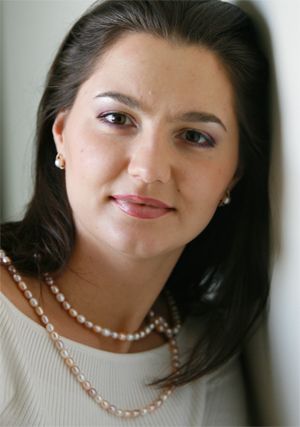 Best of all was the stunning account by Kristina Kapustinskaya of Grusha the Gypsy girl. She has one of those resonant and rich voices that only seem to materialise out of Russia and its surrounding states. Her first appearance is singing a long, sustained and alluring gypsy song to a gentle string and harp accompaniment. It had the audience absolutely spellbound and luscious is the only word to describe her singing of it! The part requires a fearsome range, dramatic temperament and a superb technique for its more florid moments and these Kapustinskaya provided in abundance.

In the mezzo role of Grusha the gypsy, Kristina Kapustinskaya oozed technical virtuosity and vocal charm.

Kristina Kapustinskaya was born in Kiev. Studied at the Kiev State Glière High School of Music. In 2006 she graduated from the National Tchaikovsky Music Academy of Ukraine (class of Professor Diana Petrinenko). At the Youth Opera studio theatre of the National Music Academy of Ukraine she performed as the Old Gypsy (Aleko), Dunyasha (The Tsar's Bride), Maddalena (Rigoletto) and Carmen (Carmen).
In 2007 she made her Mariinsky Theatre debut as Smeraldina in Sergei Prokofiev's opera The Love for Three Oranges.

Roles performed at the Mariinsky Theatre include:
The Angel (The Demon)
Polina and Milovzor (The Queen of Spades)
Smeraldina (The Love for Three Oranges)
Grusha the Gypsy (The Enchanted Wanderer)
Servant (Elektra)
Agrafena Alexandrovna (The Brothers Karamazov)
Carmen (Carmen)

In 2007, Kristina Kapustinskaya performed in the Russian premiere of Rodion Shchedrin's opera The Enchanted Wanderer (as Grusha the Gypsy) during the Stars of the White Nights festival at the Mariinsky Theatre Concert Hall. She sang this role the same year at the Moscow Philharmonic at an opera festival to mark the seventy-fifth birthday of Rodion Shchedrin, and one year later at the Edinburgh Festival. In 2009, Kristina Kapustinskaya received a Golden Mask award for her interpretation of the role of Grusha (nominated for "Best female role in opera").

The singer was also the first performer of the role of Agrafena Alexandrovna in Alexander Smelkov's opera The Brothers Karamazov, which was premiered at the Mariinsky Theatre on 23 July 2008.

At the opening of the 2007-2008 season, Kristina Kapustinskaya performed the mezzo-soprano role in Sergei Prokofiev's Alexander Nevsky cantata with the St Petersburg Philharmonic under Yuri Temirkanov. She has toured with the Mariinsky Opera Company to Sweden, the USA and the UK.