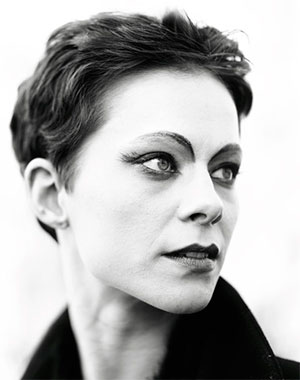 Anna-Maria Hefele is an overtone singer and voice artist. She plays nyckelharpa, harp and other instruments. In 2014 she graduated as Bachelor of Arts in Elemental Music and Dance Education with classical singing as her main subject from the Carl Orff Institute, Mozarteum University Salzburg.

She started with overtone singing in 2005 and has written compositions for polyphonic solo voice since 2006. In 2006 she started building music instruments such as didgeridoo, wooden alpine flute, ocarina and Bohemian folk harp for her own use.

Anna-Maria performs as an overtone singer in different ensembles, such as Supersonus, The Lady & The Cat, I Vocalisti chamber choir and Orchester der Kulturen. Since 2015 she has been a musician in the female circus show Gynoides Project in Stockholm. In 2013 she was a musician in Yvonne Pouget’s dance theatre and in 2014 she was also part of her team in the dance production La Cattedrale Nel Vento.

From 2010 to 2012 she was a singer, composer and vocal artist at the Nationaltheater Mannheim for the contemporary ballet The garden of other by Canadian choreographer Dominique Dumais. She sang in different choirs such as the Deutscher Jugendkammerchor (Robert Göstl), Europäischer Obertonchor (Wolgang Saus, Steffen Schreyer), Obertonchor München (Matthias Privler) She is also quite enthusiastic about old, traditional Bavarian folk-music and yodelling, and also plays traditional dance music with Bavarian folk-music group Garchinger Pfeiffer.

As she is also a teacher and gives workshops in overtone singing, yodelling and vocal improvisation. Engagements for the current season include concerts with I Vocalisti chamber choir in Quickborn, Lübeck, Lütjensee, Stuttgart, Ulm and Hamburg, with Andreas Felber and  Hans Schaderl in Luzern and with Vittorio Ghielmi in Oslo.
Information valid for February 2018