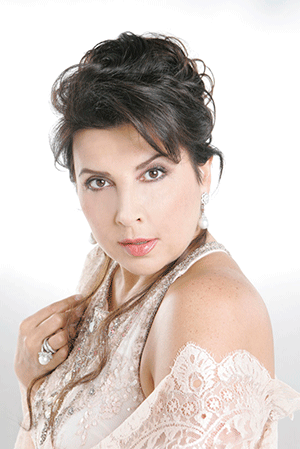 Maria Guleghina was born in Odessa. After graduating from the Odessa Conservatoire, Guleghina went on to hone her skills with Yevgeny Ivanov, a famous teacher and professor of the Conservatoire. In 1983, she became a soloist of the National Academic Grand Opera and Ballet Theatre of the Byelorussian SSR, where she perfected her craft under conductor Yaroslav Voshchak.

In 1987, Guleghina made her debut at the Teatro alla Scala as Amelia in Giuseppe Verdi’s Un ballo in maschera performed under the baton of Gianandrea Gavazzeni (her on-stage partners were Luciano Pavarotti and Leo Nucci). She has also appeared in such operas as I due Foscari (Lucrezia Contarini), Tosca (title role), The Queen of Spades (Liza), Manon Lescaut (title role), Nabucco (Abigaille), Macbeth (Lady Macbeth), La forza del destino (Leonora), Fedora and Turandot (title roles) and has given solo concerts at the theatre.

Since the early 1990s, Guleghina has sung at the best opera venues in the world. In 1991, she made her debut at the Metropolitan Opera (as Madeleine in Andrea Chénier) and the Wiener Staatsoper (Tosca). In 1992, Guleghina debuted at the Mariinsky Theatre (as Liza in The Queen of Spades); while in 1995 she appeared at the Royal Opera House in Covent Garden (as the title character of Fedora) for the first time. In 1997, the singer debuted at the Opéra National de Paris (Tosca).

Maria Guleghina is an expert in “bloodthirsty” characters and “bloodthirsty” roles, which require her to be genuine in all aspects. She needs to have vibrant energy, great voice, genuine emotions, and to be one with her character. She is in her element when she performs in Verdi’s and Puccini’s operas, as well as in verismo operas. Her signature roles include Abigaille in Nabucco.