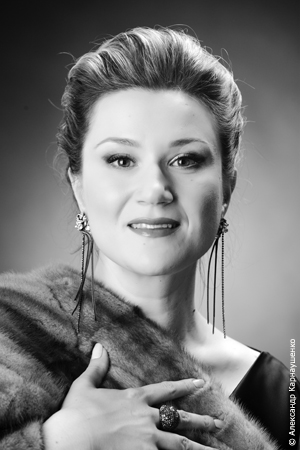 Ekaterina Gubanova is one of the finest mezzo-sopranos of the last generations. Her past and future appearances include performances in Opera Houses like the Metropolitan Opera, Teatro alla Scala, Royal Opera House Covent Garden, Bayerische Staatsoper, Staatsoper Berlin, Chicago Lyric Opera, Teatro Real in Madrid and Vienna Staatsoper. Gubanova was born in Moscow and began her musical studies as a pianist. Honorary graduate in choir conducting, Ekaterina studied opera singing at the Moscow Tchaikovsky Conservatoire and Sibelius Academy (Helsinki), and then she was a member of the Young Artists Programme at the Royal Opera House (London).

In 2005 she sang Brangäne in Tristan und Isolde at Opera National de Paris with immense critical success. Since then she has reprised the role in Baden-Baden, Rotterdam, Paris, Berlin, Tokyo, St Petersburg and Munich, collaborating with conductors such as Daniel Barenboim, Valery Gergiev, Esa-Pekka Salonen and Zubin Mehta. She sang Fricka in both Das Rheingold and Die Walküre with Daniel Barenboim both at Staatsoper Berlin and Teatro alla Scala.

Her Japanese debut was marked by her performance in Verdi’s Requiem, conducted by Riccardo Muti in Tokyo.

In Russia she sang Principessa Eboli in Don Carlo at the Stars of the White Nights festival in St Petersburg, where she later returned as Lyubasha in Rimsky-Korsakov’s The Tsar’s Bride and as Marguerite in Berlioz’ La damnation de Faust.

After her debut at the Metropolitan Opera in Prokofiev’s War and Peace, she started a strong collaboration with the company singing Giulietta in the new production of Les contes d'Hoffmann, conducted by James Levine, Eboli in Don Carlo during the Japan Tour 2011 and Giovanna Seymour in Anna Bolena, the opening production of season 2011-2012. In season 2016-2017 she sang Brangäne in the new production of Tristan und Isolde, opening night, and Amneris in Aida.

In concert, she has sung the role of Jocasta in Oedipus Rex in London and Stockholm under Esa-Pekka Salonen. Elsewhere, Gubanova has been invited to perform Mahler’s Das Lied von der Erde in Paris, Moscow, Seoul and Dublin; she also sang the Rückert Lieder in Wiesbaden. She returned to Rotterdam to sing Das Lied von der Erde to open their 2008 festival, and at the 2009 festival she presented songs from Des Knaben Wunderhorn. This work she also performed in Sydney Opera and at the BBC Proms under Mark Elder. She sang Verdi’s Requiem under the baton of Daniel Barenboim both with Teatro alla Scala and Staatsoper Berlin, with Gustavo Dudamel in Los Angeles and with Riccardo Muti in Vienna.

The engagements of the last seasons include Die Walküre and Das Rheingold in Staatsoper Berlin, in Scala and at the BBC Proms; Don Carlo in Teatro alla Scala, Münich, St Petersburg, Toulouse, New York and Dresden; Verdi Requiem in Florence, Naples and St Petersburg; Tristan und Isolde in Munich, Valencia, Tokyo, Salzburg and Madrid, Rusalka in Chicago, Werther in Berlin, Norma in Barcelona, Bluebeard's Castle in Toronto and Paris, Norma in Munich and Istanbul, Aida in Vienna and Verona, Berllioz’s Roméo et Juliette in Chicago with Riccardo Muti and Chicago Symphony Orchestra.