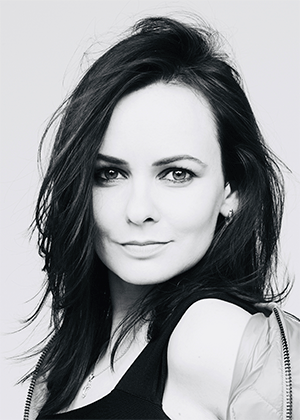 Anna Goryachova was born in Leningrad. In 2008 she graduated with distinction from the Vocals Faculty of the Rimsky-Korsakov St Petersburg State Conservatory (class of Tamara Novichenko and subsequently class of Galina Kiseleva). From 2009 to 2011 she trained under Renata Scotto and Anna Vandi at the Accademia Nazionale di Santa Cecilia (Rome) and also under Romualdo Savastano at the A.R.T. Musica academy (Rome).

From 2008 to 2011 Anna was a soloist at the Mikhailovsky Theatre and the St Petersburg Chamber Opera. In 2010 she was nominated for Russia’s Golden Mask National Theatre Award for her performance of the role of Donna Elvira in the opera Don Giovanni staged by Yuri Alexandrov.
In 2011 under the baton of Alberto Zedda she made her debut at the Vlaamse Opera (Flemish Opera) in Antwerp as the Marchesa Melibea (Il viaggio a Reims). From 2012 to 2017 Anna was a soloist at the Opernhaus Zürich, where she performed the roles of Adalgisa (Norma), Rosina (Rossini’s Il barbiere di Siviglia), Polina (The Queen of Spades), Magdalena (Die Meistersinger von Nürnberg), Zerlina (Don Giovanni), Eustazio (Handel’s Rinaldo), Alcina (Haydn’s Orlando paladino), Zelim (Vivaldi’s La verità in cimento), Lucilla (Rossini’s La scala di seta), Masha (Eötvös’ Three Sisters), Herodias’ Page (Salome) and the Marchesa Melibea, and she has collaborated with such conductors as Teodor Currentzis, Nello Santi, Fabio Luisi, Alain Altinoglu, Enrique Mazzola, Riccardo Frizza, Ottavio Dantone, Daniel Barenboim, Antonio Pappano, Michele Mariotti, Stefano Montanari and Daniele Rustioni among others. Took part in the world premiere of Christian Jost’s opera Rote Laterne (2015).
In 2012 Anna sang the role of Alcina (Orlando paladino) at the Théâtre du Châtelet in Paris and made her debut at the Rossini Festival in Pesaro (Italy) as Edoardo (Matilde di Shabran), and in 2013 at the same festival she appeared in the role of Isabella (L’italiana in Algeri). In 2014 she made her debut at the Opéra national de Paris as Ruggiero (Handel’s Alcina, staged by Robert Carsen). In 2015 she made her first appearance at the Dutch National Opera in Amsterdam as the Marchesa Melibea, returning there in 2016 to sing the role of Polina. Has been a guest soloist at the Teatro dell’Opera di Roma, the Teatro di San Carlo in Naples, the Opera di Firenze, the Teatro Comunale di Bologna and the Teatro Lirico Giuseppe Verdi (Trieste).
In the 2017–18 season Anna performed the role of Carmen at the Royal Opera House (Covent Garden) in London, the Teatro Real in Madrid and at the Arena di Verona Opera Festival.
In 2018 at the Opernhaus Zürich she sang as Dorabella in Così fan tutte, staged by Kirill Serebrennikov. In 2019 at Covent Garden she performed the role of Polina. That same season she made her debut at the Staatsoper Unter den Linden in Berlin as Clara in Dmitri Tcherniakov’s production of Betrothal in a Monastery, as well as appearing at the Bregenz Festival (Austria), where she sang as Dulcinée (Massenet’s Don Quichotte) and performed the mezzo-soprano role in Verdi’s Requiem.

Since 2019 Anna has been a guest soloist of the Bolshoi Theatre of Russia, where she has performed the roles of Dido (Dido and Aeneas), Rosina (Rossini’s Il barbiere di Siviglia) and the Marchesa Melibea.
In 2020 at the Grand Théâtre de Genève she sang the roles of Angelina (Cenerentola) (La Cenerentola) and Sesto (La clemenza di Tito) in addition to making her debut at the Vienna State Opera in the role of Olga (Dmitri Tcherniakov’s production of Eugene Onegin); in Vienna she subsequently performed the roles of Angelina and Carmen.

In the 2020–21 season Anna received Valencia’s “Best Mezzo-Soprano of the Season” award for the role of Angelina in La Cenerentola, staged by Laurent Pelly at the Palau de les Arts Reina Sofía.

In 2022 she made her Mariinsky Theatre debut, performing the title part in La Cenerentola.
Information for February 2022