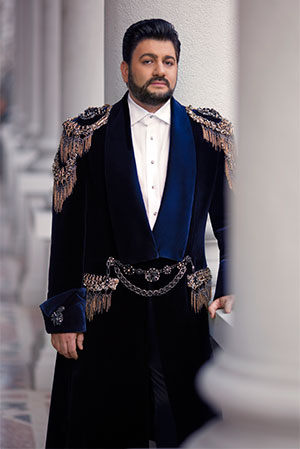 Yusif Eyvazov was born in Algiers in 1977. He started studying vocals at the Hajibeyov Baku Academy of Music. In 1997 he moved to Italy to continue his studies, living in Milan; he further trained at masterclasses conducted by Franco Corelli, Ghena Dimitrova, Magda Olivero, Plácido Domingo, Gianandrea Gavazzeni.

He launched his career as an opera singer at theatres and concert halls in Italy, performing the roles of Don José (Carmen; Sala Tripcovich, Trieste, 2005), Alfredo Germont (La traviata; Bisceglie, 2007) and the Duke of Mantua (Rigoletto; Teatro Verdi, Milan, 2008). Has toured to Germany, Austria, Spain, Japan and South Korea. In 2010 he made his debut as Mario Cavaradossi (Tosca) at the Bolshoi Theatre of Russia (Moscow).

The singer’s repertoire generally comprises roles from operas by Puccini, Verdi, Leoncavallo and Mascagni (Canio in Pagliacci, Calaf in Turandot, Manrico in Il trovatore, Dick Johnson in La fanciulla del West, Don Alvaro in La forza del destino, Rodolfo in La Bohème, Turiddu in Cavalleria rusticana, Riccardo in Un ballo in maschera, Ismaele in Nabucco, Radamès in Aida and Macduff in Macbeth). He also performs the roles of Herman in The Queen of Spades, Maurizio of Saxony in Adriana Lecouvreur, Edgardo (Sir Edgar Ravenswood) in Lucia di Lammermoor, Otello in the eponymous opera and the tenor role in Verdi’s Requiem. Wider critical acclaim came with Eyvazov’s interpretation of the role of the Chevalier des Grieux in Manon Lescaut. In 2014 the singer was invited by Riccardo Muti to perform that role at the Teatro dell’Opera di Roma, where he first sang together with Anna Netrebko. Eyvazov has subsequently been a regular stage partner of Netrebko and together with her has released the recordings Verismo and Romanza.

In 2018 the singer made his debut at the Teatro alla Scala, performing the role of Andrea Chénier in Giordano’s eponymous opera; the critics hailed that interpretation as one of the finest in recent years.

In 2016 he made his Mariinsky Theatre debut, singing the role of Calaf in Turandot.