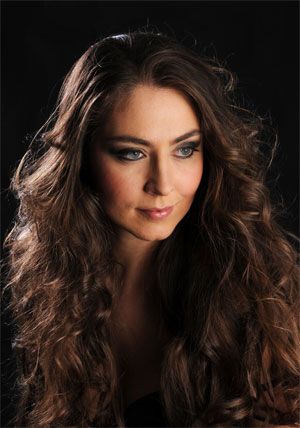 Born in Ukraine, Oksana Dyka graduated from the Kiev Conservatoire in 2004, and from 2003 to 2007 she was a lead soloist at the Ukrainian National Opera in Kiev.

In 2003 she was a prize-winner at the Marseilles International Opera Competition, which landed her the role of Tosca at the Opéra National of Montpellier in March 2005.

A highly regarded interpreter of symphony and chamber music, she made her Canadian debut in Montreal as a soloist in Shostakovich’s Symphony No 14 with the orchestra I Musici. The success she enjoyed led her to sing the same programme in Italy with the Orchestra Sinfonica di Padova and in Denmark with the Odense Symphony Orchestra in 2007.

Early highlights include Don Carlo (Elisabetta) at the Teatro Regio in Turin, Il trovatore (Leonora) at the Circuito Lombardo and Madama Butterfly at the Queensland Opera in Brisbane. In recital she has performed with the Orchestra Sinfonica Verdi conducted by maestro Slatkin in New Year concerts (Verdi’s arias), with the San Francisco Symphony conducted by Michael Tilson Thomas in Shostakovich’s song cycle From Jewish Folk Poetry, and with the Ljubljana Symphony Orchestra in Verdi’s Requiem.

Over the following years, she has appeared at the world’s great stages, with Tosca at the Teatro dell’Opera in Rome directed by Franco Zeffirelli, a stage version of Verdi’s Requiem at the Tampere Opera in Finland and her debut as Amelia (Simon Boccanegra) at the Estonian National Opera in Tallinn. Further highlights have included Ariadne auf Naxos in Genoa, Il trittico (Giorgetta) in Frankfurt, Madama Butterfly in Bologna, Graz and Valencia, Aida in Buenos Aires on tour with La Scala under the baton of maestro Barenboim, Il tabarro at the Opéra Bastille in Paris, I pagliacci and Tosca at La Scala in Milan, Tosca in Dresden, in Valencia under the baton of maestro Mehta, at the Arena di Verona and in Pompei with the Teatro San Carlo di Napoli.

In recent seasons, she received rave reviews from the public and critics singing a new production of Eugene Onegin in Los Angeles under the baton of James Conlon, Mefistofele in Monte Carlo, Tosca in Frankfurt, Dresden and Valencia, Aida and Tosca at La Scala and Un ballo in maschera in Turin.

Most recently have been Tosca at the Festival Puccini in Torre del Lago, the Berliner Staatsoper and the Royal Opera House, Madama Butterfly in Los Angeles, Un ballo in maschera at La Scala and in Tokyo on tour with the Teatro Regio di Torino, Aida at the Arena di Verona and the Opéra Bastille, a new production of Prince Igor at the Metropolitan under the baton of maestro Gergiev, Prince Igor and Tosca at the Mariinsky Theatre and Britten’s War Requiem at the Bregenz Festspiele.

Future engagements include Tosca at the Deutsche Oper in Berlin, Aida, Tosca and Jenůfa at the Metropolitan Opera and Madama Butterfly at the Opéra Bastille.