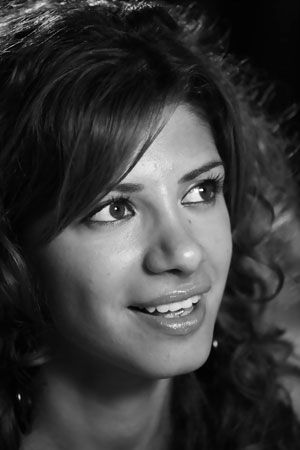 Born in Tbilisi (Georgia) in 1984. In 2006 she graduated from the Tbilisi Conservatoire, having specialised in music theory (class of Vano Sarajishvili), and in 2009 from the faculty of classical singing. In productions by the conservatoire she performed the role of Pamina in Mozart’s opera Die Zauberflöte as well as the role of Violetta in Giuseppe Verdi’s opera La traviata.

In 2007 at the Contra-Point #1 in Tbilisi Teona Dvali performed Alfred Schnittke’s Three Madrigals for Soprano and Five Instruments and sang the role of Violetta in Verdi’s La traviata at the Great Hall of the Conservatoire of Tbilisi. In 2009 she performed the part of Violetta in La traviata at the National Opera House of Georgia and appeared as Norina in Gaetano Donizetti’s opera Don Pasquale at the Tbilisi Opera.

Between 2008 and 2011 she trained at the Opera Studio of the Accademia Nazionale di Santa Cecilia in Rome (class of Renata Scotto).
In 2010 she won the special prize for best performance of a bel canto aria at the 1st International Arturo Toscanini Singing Competition in Manfredonia (Italy) and sang the role of Gilda in Verdi’s opera Rigoletto at the Teatro Comunale Traiano in Civitavecchia (Italy).

In 2010 she was the victor at the International Rolando Nicolosi Vocalists’ and Concert-Masters’ Competition in Rome. That same year, she performed the role of Gilda in a production of Rigoletto at the Teatro Comunale Traiano and she also appeared in a concert with tenor Giordano Luca in Parma. In 2011 she made her debut as Gilda in Rigoletto at the Mariinsky Theatre in St Petersburg and performed the role of Adina (replacing Anna Netrebko) in Donizetti’s L’elisir d’amore in Laurent Pelly’s production for the Mariinsky Theatre. In 2013 she sang the role of Gilda in Verdi’s Rigoletto in Gdansk (Poland, Foundation of the Arena di Verona) under the baton of Massimiliano Caldi.

In 2013 she sang three romances by Giuseppe Verdi as part of a ballet performance at the Teatro Filarmonico (Verona) and appeared as Violetta in La traviata at the Teatro alla Scala. In 2014 she sang the role of Adina in Gaetano Donizetti’s L’elisir d’amore with the famous Italian tenor Francesco Meli at the Mikhailovsky Theatre (St Petersburg). That year she also became a guest soloist at the Mariinsky Theatre and has appeared as Adina in Donizetti’s L’elisir d’amore at the Concert Hall of the Mariinsky Theatre. In 2015 she sang the role of Violetta in La traviata at the Hyogo Performing Arts Center (Japan).