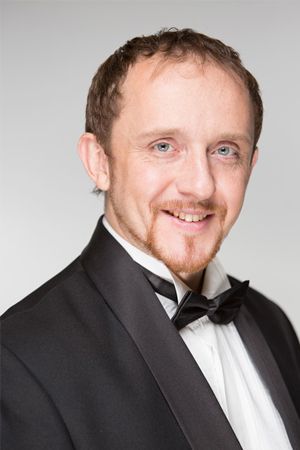 Baritone
Dmitry Lavrov studied opera at the Rimsky-Korsakov Conservatoire in St Petersburg (2002 – 2007) and in 2010 he completed his postgraduate studies there (class of Professor Vladimir Vaneyev). Dmitry first appeared onstage as a student, singing the title role in Tchaikovsky’s opera Eugene Onegin and Robert in Iolanta.

From 2007-2010 Dmitry Lavrov was a soloist of the St Petersburg Chamber Opera Company, where he performed the roles of Eugene Onegin in Tchaikovsky’s Eugene Onegin, Don Giovanni in Mozart’s Don Giovanni, Yeletsky in Tchaikovsky’s The Queen of Spades, Silvio in Leoncavallo’s I pagliacci, Shchelkalov in Musorgsky’s Boris Godunov and Podkolesin in Musorgsky’s The Marriage.

Lavrov joined the Young Artist Scholarship Programme at the Deutsche Oper am Rhein in 2010-2011 and moved to a full FEST contract for 2011-2014.

At he Deutsche Oper his repertoire included:
Figaro in Rossini’s Il barbiere di Siviglia,
Wolfram in Wagner’s Tannhäuser,
Silvio and the prologue in Leoncavallo’s I pagliacci,
Escamillo and Moralès in Bizet’s Carmen,
The Gaoler in Poulenc’s Dialogues des Carmélites,
Marullo in Verdi’s Rigoletto
and the role of Miller in Montsalvatge’s El gato con botas.

This season at the Oper am Rhein Lavrov will be appearing as Figaro in Il barbiere di Siviglia, Silvio in I pagliacci, Escamillo in Carmen and the Count in Le nozze di Figaro.

Dmitry has performed numerous concert programmes consisting of arias from operas and operettas, romances and songs in the Great and Small Halls of the St Petersburg and Moscow Philharmonic Societies, the Great Hall of the St Petersburg Academic Capella and the Tonhalle in Düsseldorf.
In 2012 he sang the baritone role in Prokofiev’s cantata Ivan the Terrible at the Auditorio Kursaal in San Sebastián (Spain) with the St Petersburg Philharmonic Orchestra under the baton of Yuri Temirkanov. Dmitry sang at the grand opening gala of the German AIDS Foundation (Düsseldorf 2012).
In October 2013 he performed the baritone role in Rachmaninoff’s cantata The Bells at the Tonhalle Düsseldorf, conducted by Ari Rasilainen.

In the 2013- 2014 season Dmitry sang the role of Prince Afron in The Golden Cockerel by Rimsky-Korsakov with the Bergen National Opera (Norway).