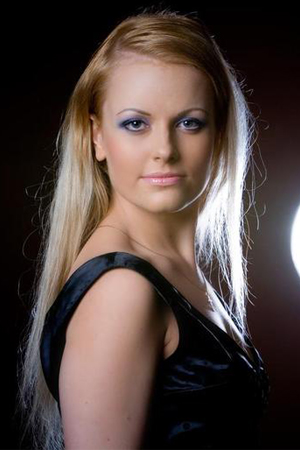 Maria Veretenina was born in Estonia. She began her professional music education at the Georg Ots Music College in Tallinn and continued her studies at the Estonian Academy of Music and Theatre, graduating with a master’s degree in 2010. From 2009-2010, she studied at the Accademia Nazionale di Santa Cecilia in Rome (class of Rebecca Berg). She has also participated in a number of master-classes, particularly with Montserrat Caballé, Wilma Vernocchio, Ingrid Kremling, Maria Acda, Larissa Gergieva and Laura Delcampe among others.

In 2011, Maria Veretenina made her debut at the Finnish National Opera, sharing the stage with Matti Salminen. Currently, Maria Veretenina lives in the United Kingdom. She has been steadily engaged in numerous performances both in the UK and abroad (Sweden, Finland, Russia, Italy, Spain, Austria, Hungary and Germany). She has sung at many music venues including the Grand Hall of the St Petersburg Philharmonia, the Wiener Kammeroper, the Royal College of Music, the Zaragoza Concert Hall, the Astrakhan Philharmonia and the Estonian National Opera. She has participated in the projects of the BBC London, the Estonian radio and TV and the TV Channel Culture (Russia).