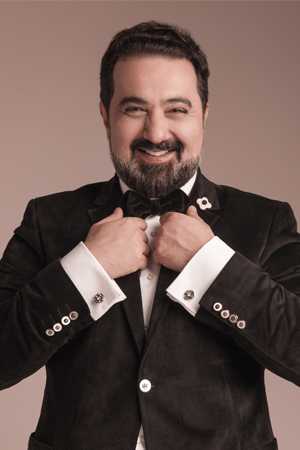 Elchin Azizov was born in Baku. In 1997, he graduated from the Azerbaijan State University of Culture and Art. In August 2005, he studied at the Mozarteum International Summer Academy (class of Richard Miller) in Salzburg. He went on to hone his skills with Alessandro Milashi in 2006–2007.

Azizov participated in the International Mstislav Rostropovich Festival in Baku several times from 2007 to 2011. Since 2008 he has been a principal soloist with the Bolshoi Theatre in Moscow where he has appeared as Rodrigo (Don Carlo), Escamillo (Carmen), Germont (La Traviata), Ibn-Hakia (Iolanta), Lescaut (Manon Lescaut, with Anna Netrebko and Yusif Eyvasov), Misgir (The Snow Maiden), Igor (Prince Igor), Gryaznoy (The Tsar’s Bride), and Tomsky (The Queen of Spades).

In 2009, he made his debut as Jago in the concert performance of Otello at the Great Hall of the Moscow Tchaikovsky Conservatory. In 2015, he debuted as Ibn-Hakia (Iolanta) at the Metropolitan Opera.

In 2017, Azizov appeared as Gerard in the concert performance of Andrea Chénier in Budapest (with Anna Netrebko and Yusif Eyvazov) and took part in tours of Netrebko and Eyvazov throughout Japan, New Zealand, Australia, China, South Korea, and the United Arab Emirates.

Last season, he made his debut at the Opéra de Lyon (in the title role in Macbeth) and the Teatro Municipal, Ópera Nacional de Chile (Scarpia in Tosca). This season and in the upcoming seasons he is taking part in Samson et Dalila and Iolanta at the Metropolitan Opera.

In the 2019-2020 seasons, he is performing the roles of Paolo (Simon Boccanegra) and Lescaut (Manon Lescaut) at the same venue.
Information for May 2019