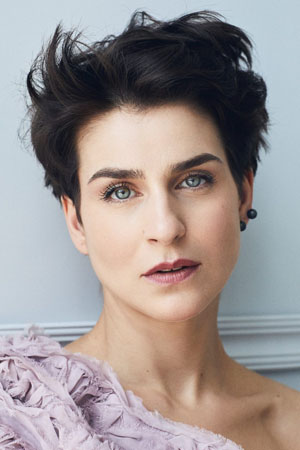 Asmik Grigorian studied at the Lithuanian Music and Theatre Academy in her home city of Vilnius, where she began her operatic career while still a student.

She was a founding member of the Vilnius City Opera and has twice received her country’s highest theatre award, the Golden Stage Cross: in 2005 for her role debut as Violetta and in 2010 for her performances as Mrs Lovett (Sweeney Todd).

In 2016 she won an International Opera Award as Singer of the Year.

Asmik made her Mariinsky Theatre debut in 2012 as Giorgetta, Suor Angelica and Lauretta (Il trittico) and has since returned to sing Lisa (The Queen of Spades), Desdemona (Otello), Rusalka (Dvořák’s Rusalka) and Natasha (Dargomyzhsky’s Rusalka).

Her engagements have taken her to the Hamburg State Opera, the Theater an der Wien, the Royal Opera in Stockholm, the Teatre del Liceu in Barcelona, the Vlaamse Opera in Ghent and Antwerp, the Komische Oper in Berlin, the Bolshoi Theatre and the Latvian National Opera among others. Her operatic roles include the title role in Tchaikovsky’s The Enchantress, Tatyana (Eugene Onegin), Cio-Cio-San (Madama Butterfly), Leonora (Il trovatore), Rachel (La Juive), Judith (Duke Bluebeard’s Castle), Tamara (The Demon), Lisa (The Queen of Spades), Chrysothemis (Elektra), Rusalka and Fedora.

She made her Salzburg Festival debut as Marie (Wozzeck) in 2017 and sang her first Salome there in 2018. Future engagements include Iolanta and Manon Lescaut at the Frankfurt Opera, Jenůfa at the Royal Opera House, Covent Garden, and Rusalka at the Teatro Real in Madrid. She will also make her debuts at La Scala as Marietta (Die tote Stadt) and at the Metropolitan Opera in New York.
Information for August 2018