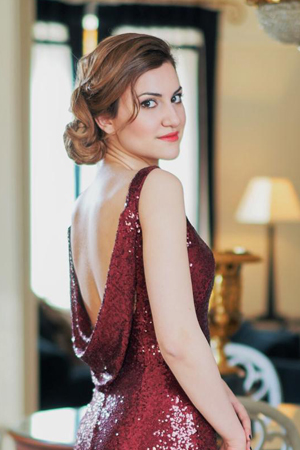 Anna Muradyan was born in Tbilisi. Graduated from the Gnessin School of Music in Moscow and Rimsky-Korsakov St Petersburg State Conservatory (2018, class of Professor Irina Bogacheva).

Since 2017 she has been a grant-recipient of the Atkins Young Artists Program at the Mariinsky Theatre.

She is continuing her studies with tutors at the Mariinsky Theatre and guest pianists and teachers from the San Francisco Opera, the Metropolitan Opera, Covent Garden and London’s Royal College of Music.

At the Mariinsky Theatre she made her debut as the Young Shepherd in the opera Tannhäuser in the summer of 2019.

Has participated in the festivals Les Azuriales in Nice (2013), Three Centuries of Classical Romance and Stars of the White Nights in St Petersburg. In 2015 she performed the solo at the premiere of the symphony-cantata From the Depths of My Heart by Sofia Mikaelyan at Smolny Cathedral in St Petersburg.
Information for July 2019