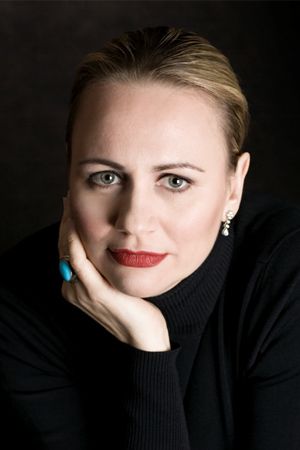 Anja Kampe, who is one of the leading Wagner-singers in the world, is not like one of these Tosca-furies that rushes of jealousy, fear or furore – grace even in pain and great lyric expression characterize her interpretation
Deutschlandfunk, Kultur heute

Her international break-through took place in 2003 as the celebrated Sieglinde in Die Walküre together with Placido Domingo as Siegmund at the Washington National Opera.
The German soprano gave guest performances of Sieglinde since then amongst others at the Los Angeles Opera, San Francisco Opera, the Bayreuth Festival, the Bayerische Staatsoper Munich, Staatsoper Berlin, Wagner in Budapest Festival, Proms London, Théâtre des Champs-Elysées Paris and at the Gran Teatre del Liceu Barcelona. Anja Kampe is also famous for her sophisticated interpretations of Senta, a role she sang amongst others at the Bayerische Staatsoper Munich, Théâtre Royal de la Monnaie, at the New National Theatre Tokyo, at the Deutschen Oper am Rhein, the Oper Hamburg, in Covent Garden, at the Teatro Real as well as in Vienna, Zurich and Milano. In 2006, she made her debut as Fidelio-Leonore in  Glyndebourne, since then she is guesting regularly in this role in Zurich, Los Angeles, at the Vienna and Bayerische Staatsoper Munich. In 2014 she sang Fidelio for the opening of the Teatro alla Scala Milano. In the season 2014-15, Anja Kampe made a highly acclaimed debut of Tosca at the Staatsoper Berlin and sang there her first Kundry in Germany. At the Bayreuth Festival 2015, she is again Sieglinde in the RING. Plans for the season 2015-16 include amongst others concerts with Valéry Gergiev and Péter Halász in Munich and Budapest, the revivals of Tosca and Die Walküre in Berlin, Fidelio and Die Walküre in Munich as well as Fidelio in Vienna and Die Walküre at the Wagner in Budapest Festival. She returns to the Teatro Real as Kundry and will make her debut as Tove in the Gurrelieder with Ingo Metzmacher. With her broad repertoire that includes moreover amongst others Ariadne, Lisa, Donna Elvira, Elisabeth, Irene, Giorgetta, Carlotta, Jenufa, Elsa and Odabella Anja Kampe is a regular guest at international opera houses.
Anja Kampe has worked amongst others with the following conductors: Claudio Abbado, Marc Albrecht, Alain Altinoglu, Daniel Barenboim, Michael Boder, James Conlon, Sir Mark Elder, Adam Fischer, Daniele Gatti, Valery Gergiev, Hartmut Haenchen, Daniel Harding, Marek Janowski, Eivind Gullberg Jensen, Vladimir Jurowski, Jesùs López-Cobos, Alexander Liebreich, Fabio Luisi, Nicola Luisotti, Zubin Mehta, Riccardo Muti, Kent Nagano, Andris Nelsons, Kazushi Ono, Alejo Pérez, Kirill Petrenko, Josep Pons, Markus Poschner, Donald Runnicles, Stefan Soltesz, Jeffrey Tate, Christian Thielemann and Franz Welser-Möst. Recently a DVD of Der fliegende Holländer from Zurich was published by Deutsche Grammophon. In addition to that, recordings of Fidelio and Tristan und Isolde from Glyndebourne as well as Die Gezeichneten from Los Angeles are available on CD. In 2013 the recording of Die Walküre with Valéry Gergiev and the Mariinsky Orchestra won the Echo Klassik for the best Opera Recording of the Year (19th century).