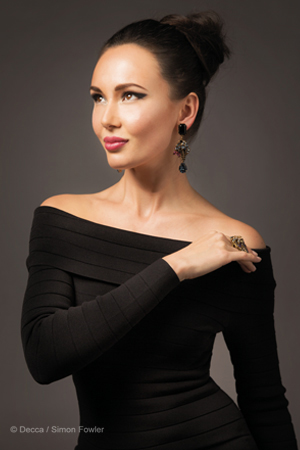 Russian soprano Aida Garifullina was the winner of the 2013 Operalia Competition. Aida Garifullina is an exclusive recording artist for Decca Records – her debut album was released in February 2017 to unanimous critical acclaim and has been awarded a prestigious ECHO Klassik award. 2018 saw the release of her new album Midnight in Moscow with Alexandra Pakhmutova and Igor Krutoi’s songs.

Engagements for the current season include Carmina Burana at the Shanghai Symphony Hall and in the Forbidden City (Beijing), L’elisir d’amore at the Wiener Staatsoper, recitals at the Moscow State Conservatory and Wiener Konzarthaus, Don Giovanni at the Metropolitan Opera, Betrothal in a Monastery at the Staatsoper unter den Linden in Berlin and Rigoletto at the Wiener Staatsoper.

Since 2014 Aida Garifullina has been a  member of the ensemble of Wiener Staatsoper where she has performed various roles including Musetta (La Bohème), Susanna (Le Nozze di Figaro), Princess Eudoxie (La Juive), Elvira (L'italiana in Algeri), Adina (L'elisir d'amore), Zerlina (Don Giovanni), Norina (Don Pasquale). Aida Garifullina is also a regular principal of the Mariinsky Theatre in roles such as Natasha in War in Peace (the new production by Graham Vick which was broadcasted live in cinemas all over the world), Gilda, Susanna, Adina and The Snow Maiden.