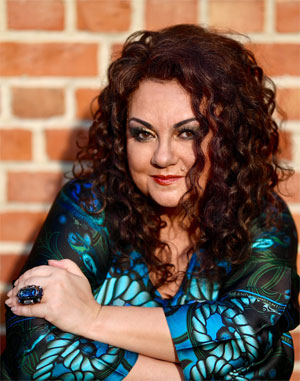 A combination of musical sensitivity, superlative technique and strong stage presence marks Elena Pankratova out from among a new generation of dramatic sopranos. The spectacular success of her first Dyer’s Wife in Richard Strauss’ Die Frau ohne Schatten at the Maggio Musicale Fiorentino festival in 2010 under the direction of Zubin Mehta proved an important breakthrough for her career that also succeeded in invitations from such renowned theatres as the Teatro alla Scala (2012), the Teatro Colón in Buenos Aires (2013), the Bavarian State Opera (2013, 2014, 2017), the Royal Opera House, Covent Garden (2014), the Royal Danish Opera (2015) and the Staatsoper Unter den Linden in Berlin (2018). Her rendition of the Dyer’s Wife in all of these theatres was met with enormous success.

Elena Pankratova is the first Russian dramatic soprano in the 140-years history of the Bayreuth Festival, where since 2016 she sings Kundry in Parsifal (DVD & Blu-ray by Deutsche Grammophon) and since 2019 – also Ortrud in Lohengrin.

Highlights in Elena Pankratova’s career include Odabella in Verdi’s Attila at the Teatro alla Scala and the Mariinsky Theatre, Elektra at the Vienna State Opera, the Concertgebouw, the Semperoper Dresden, in Lyon, Naples and at the George Enescu Festival in Bucharest, Turandot at the Vienna State Opera, in Bonn, Bologna, Florence, Naples, Zhuhai (China), Tel Aviv and at the Mariinsky Theatre, Kundry in Amsterdam, Venus at the Bavarian State Opera and NHK Hall in Tokyo, Sieglinde at the Semperoper Dresden, in Florence and at the Mariinsky Theatre, Leonore in Fidelio in Geneva, Seville and Bilbao, Leonora in Il trovatore in Stuttgart, Dortmund and Moscow, Amelia in Un ballo in maschera at the Vienna State Opera, the Savonlinna Opera Festival (Finland) and in different theatres of Germany, Ortrud at the Deutsche Oper Berlin and the Théâtre Royal de la Monnaie in Brussels, Tosca at the Bridgewater Hall in Manchester, at the Ludwigsburg Festival, in Frankfurt, Stuttgart, Oslo and Savonlinna, Ariadne in Bonn and Munich, Norma in Düsseldorf, Basel and at the Mariinsky Theatre, Senta in Der fliegende Holländer at the Semperoper Dresden, in Frankfurt, Cologne and Savonlinna, Saffi in Johann Strauss’ Der Zigeunerbaron at the Seefestspiele Mörbisch (Austria), Leonora in La forza del destino at the Mariinsky Theatre, the Nationaltheater Mannheim and the Theater Bremen, Rosalinde at the Alte Oper Frankfurt and the Bavarian State Opera, Abigaille in Nabucco in Frankfurt, Rotterdam, The Hague, at the Bavarian State Opera and in Mexico City.

Born in Yekaterinburg, one of the largest industrial and cultural centres of Russia, Elena Pankratova initially studied conducting and piano in her native city before graduating (with honours) as a singer, actor and voice teacher from the Rimsky-Korsakov St Petersburg State Conservatory. She was winner of several international singing competitions in Italy and Spain and worked for years with the great soprano Renata Scotto, polishing her roles in the Italian repertoire. The singer also received an enthusiastic reception from both critics and audiences alike for her interpretations in Pergolesi’s Stabat Mater at the Kioi Hall in Tokyo, Shostakovich’s Symphony No. 14 at Munich’s Prinzregententheater, Mahler’s Symphony No. 2 at the Alte Oper Frankfurt, Mahler’s Symphony No. 8 at the MITO SettembreMusica festival in Turin and at the Beijing Music Festival 2011, as well as Rossini’s Stabat Mater in Marseille in 2012. Her and pianist Andrej Hoteev’s CD Pure Mussorgsky – the recording of the original versions of Mussorgsky’s Pictures at an Exhibition and Songs and Dances of Death – was published in 2014 by Berlin Classics and nominated for the Preis der deutschen Schallplattenkritik.

The singer made her debut at the Mariinsky Theatre as Sieglinde (Die Walküre) in 2014. Later she also appeared as Turandot, Odabella (Attila), Leonora (La forza del destino), Norma, Elektra and Kundry.

The singer’s upcoming appearances include the roles of Turandot in Munich, Verona, Paris, Berlin, Madrid, Barcelona and New York (Metropolitan Opera), Elektra in Tokyo, Hamburg, Munich and Moscow, Kundry in Brussels and Barcelona, the Dyer’s Wife in Vienna and Ortrud at the Salzburg Festival.

Alongside her international stage career, Elena Pankratova is actively involved in discovering and nurturing talented young vocalists; since 2015 she has been a professor at the Universität für Musik und darstellende Kunst Graz (Austria), and she has also conducted masterclasses at the Royal Opera House, Covent Garden as part of a support programme for young opera singers (Jette Parker Young Artists Programme, 2014), at the Verbier Festival Academy in Switzerland (2015 and 2016), at the Théâtre Royal de la Monnaie in Brussels and at the Bayreuth Festival (2018).
In January 2021 the singer was a jury member of the international Tenor Viñas Contest in Barcelona.
Information for March 2021