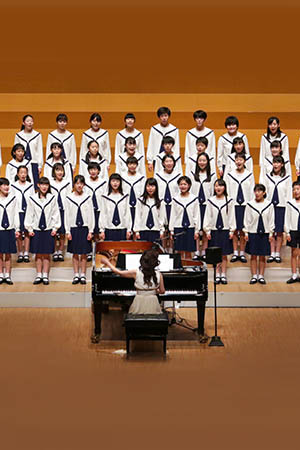 The Suginami Children's Choir was founded in 1964 and celebrated its 50-year anniversary in 2014. The ensemble used to regularly appear at the NHK song show. Currently, the choir counts 200 singers of various ages. The choir performs on radio and on TV, regularly tours in Japan and other countries, takes part in subscription and New Year performances in Tokyo, as well as participates in those productions of the Teatro Regio di Torino, the Bolshoi Theatre of Russia, the National Opera and Ballet of Bulgaria, and the Mariinsky Theatre which are performed during their tours in Japan.

The choir’s repertoire includes academic music, as well as “choral musical” works, film scores and pop music, transcriptions of folk songs of different countries, piano and symphony works. The ensemble has frequently taken part in performances of Yuzuru at different venues throughout Japan.
Information for February 2019