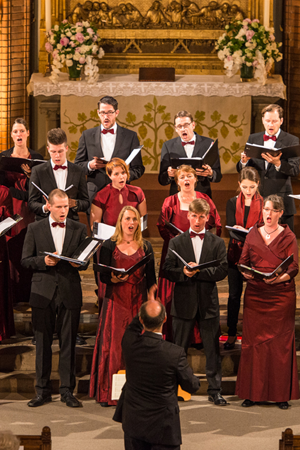 Depending on the project, the chamber chorus I Vocalisti consists of twenty to sixty vocally and musically trained singers from northern Germany, who come together to perform challenging sacred and secular choral music on a professional level.

In addition to performing works by old maestri including Bach, Brahms and Mendelssohn, the chorus' repertoire focusses on contemporary works. Among others, Vic Nees (Belgium) and Aleksandar S. Vujić (Yugoslavia) have written pieces for the chorus. I Vocalisti is also distinguished by its work with various composers and conductors such as Uģis Prauliņš, Eric Whitacre, Ola Gjeilo and Christoph Eschenbach. Moreover, the chorus regularly expands its musical spectrum by working in crossover projects with such groups as the Klazz Brothers and the Danish world music band Afenginn.

Since its foundation in 1991, the ensemble has performed in numerous concert series and has received prizes at national and international choral competitions, including 1st prize at the VI German Choral Competition in 2002 and 1st prizes at the international choral competitions in Tolosa (Spain) in 2004 and in Cork (Ireland) in 2009. I Vocalisti have also recorded works for radio (NDR) and television (ARD) as well as for the labels Carus, Rondeau and Sony. The ensemble performs at major festivals, including the Schleswig-Holstein Music Festival and the Festival des Choeurs lauréats.