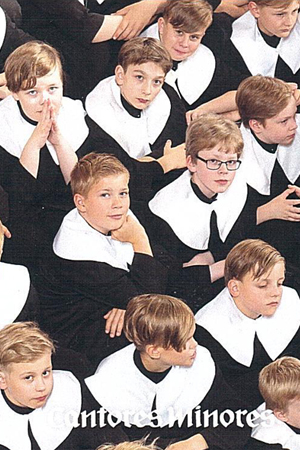 Cantores Minores, the Choir of Boys and Young Men of Helsinki Cathedral, is the largest and most professional boys choir and choir school in Finland offering boys and young men both musical and spiritual education in the Helsinki region.

Cantores Minores was founded in 1952. Its first conductor was the Finnish-American doctor of musicology, Ruth-Esther Hillilä. In 1965, Cantores Minores became the first Finnish choir to win the Let the People Sing competition organized by the BBC, and in 1994 it performed well in its category at the first European Competition for Cathedral Choirs in Amiens, France.

The present conductor Hannu Norjanen received his early musical training in the Cantores Minores boys' choir from 1974-80 and in 2005 became the choirs’s Artistic Director.

Cantores Minores was nominated as the Youth Choir of the Year for the 2009-10 season by the Finnish Broadcasting Company (YLE). In October 2013, the choir organized the 3rd Baltic and Nordic Boys Choir Festival in Helsinki with over 300 participants from Finland, Lithuania, Norway, Russia and Sweden. In 2014 the choir received the State Prize for Music and in 2015, it was granted the Educator of the Year Prize.

The choir's repertoire consists of sacral music by European and especially Finnish composers from the 12th to the 21st centuries as well as different folk songs.

Over the years the choir has toured abroad on 63 occasions in the USA, Japan, India and many other countries. The musicians have performed for several heads of state and at private audiences for pope John Paul II and pope Benedictus XVI. The choir has appeared in several famous churches and venues such as the Westminster Abbey in London, Nôtre Dame in Paris, St Peter’s Basilica in Vatican, Washington National Cathedral, Tchaikovsky Hall in Moscow and State Academic Cappella in St Petersburg.

This season the choir is performing the St John Passion and Christmas Oratorio by Johann Sebastian Bach, Lobgesang (Symphony No 2) by Felix Mendelssohn and the Creation oratorio by Josef Haydn. The 65th international concert tour in June 2019 will take the choir to Germany (Hannover, Hamburg), Denmark (Vejle, Copenhagen) and Sweden (Malmö).

Since 1965 Cantores Minores had been orginising the Helsinki Bach Week. The next festival is gong to take place in 2020.

The choir’s first CD of christmas carols won rewiewers’ praise for its pure intonation and brilliant sound. The latest CD CREDO was released in 2015 and it contains compositions by 20th-century Finnish and European composers.

The President of Finland Sauli Niinistö and Jenni Haukio are the permanent patrons of the Cantores Minores choir.
Information for February 2019