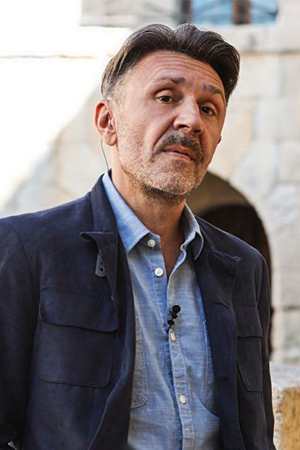 Sergei Shnurov is a rock musician, song-writer, actor, TV host and the frontman of the Leningrad and Ruble groups. He was born in 1973 in Leningrad. In 1991, he created the first Russian rapcore project called Alkorepitsa, and then he formed the electronic group Van Gogh's Ear. In January 1997, the group Leningrad was founded, and in 1998, musicians recorded their first album Bullet. Among the latest releases of the team is the video clip Exhibit (2016), watched on YouTube by over 124 million people and To drink in St. Petersburg.

On March 7, 2018, the group released a music video Not Paris, which collected more than 4.5 million views during the first day. The first solo album of the artist The Second Magadansky was released in 2008, and the next solo album Buttercup was released in 2012. Sergey Shnurov also worked as a composer on movies Boomer (2003), Personal Number (2004), Moth Games (2004), Boomer. The second film (2006), Atomic Ivan (2012), What the French are silent about (2016), Well, hello, Oksana Sokolova! (2018). He acted in a number of films, including I'm Losing Weight by Alexey Nuzhny (2018). In 2018, Dragan Kuyundzhich’s documentary To Sing in St. Petersburg. Sergei Shnurov about the group Leningrad was released in Russia.

In the Mariinsky Theatre Sergei Shnurov plays the speaking role of the elderly Benvenuto Cellini in the opera Benvenuto Cellini by Hector Berlioz and carries out the role of the narrator in the performance of Britten’s The Young Person’s Guide to the Orchestra.
Information for September 2019