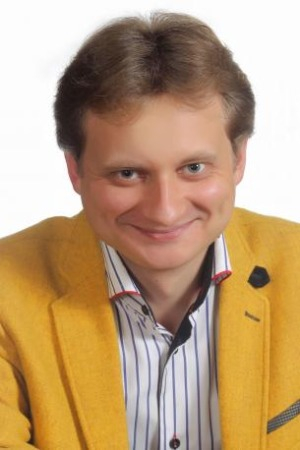 Anton Zhukov was born in Lipetsk in 1984. In 2007 he graduated from the Gnesin Russian Academy of Music (balalaika class of Vladimir Boldyrev and conducting class of Sergei Skripka), and in 2010 he completed a postgraduate study at the academy. Has been a grant recipient of the New Names and Russian Performing Art foundations as well as the Vladimir Spivakov International Charity Foundation.

Tours throughout Russia and the CIS as well as to France, Italy, Spain, Portugal, Germany, Sweden, South Korea, Turkey, Greece and Cyprus. Has appeared at the Grand Hall of the Moscow Conservatory, the Moscow International Performing Arts Centre, the Tchaikovsky Concert Hall, the State Kremlin Palace, the Concertgebouw in Amsterdam, the Großer Sendesaal of Norddeutscher Rundfunk (Hannover), the Conservatoire Russe de Paris Serge Rachmaninoff, Ludwig-Maximilians-Universität München.

Since 1995 he has made many appearances with the Ossipov Balalaika Orchestra, with which he was a soloist from 2010 to 2012. From 2006 to 2010 he taught balalaika and conducted the Loktev Song and Dance Ensemble Orchestra.

Since 2004 he has collaborated with the composer Alexander Marchakovsky, who with the musician’s involvement wrote Balalaika Concerto No. 2 and the opus Toccata-Fantasia, which is dedicated to Anton. In 2005 he organised the first concert exclusively of Marchakovsky’s music.

Has compiled several musical and music and concert literature programmes. In 2008–2009 he was a conductor of the festival Marking 110 Years of Francis Poulenc (1899–1963) , and in 2010 he was Executive Producer of the monograph concert Yevgeny Svetlanov – Composer. In 2009 he directed and ran the arts festival Days of Shukshin in Moscow, in 2014 he was the conductor and one of the composers of music for Sergei Nikonenko’s film A Will to Live after motifs from tales by Shukshin, and in 2016 he wrote the script for and conducted the music and drama production Vasily Shukshin. A Man of the Earth, for which he received the Golden Knight award from the eponymous theatre festival (Moscow, 2018).

In 2004 he founded the Moscow Instrumental Ensemble Kalina Krasnaya (“Red Snowball Tree”), which he directed throughout its existence. Since 2009 he was a soloist with the Moskontsert. Co-founder of and participant in the jazz quintet Art Module (2011–2014). Since 2012 has also worked at the Sphere Moscow Drama Theatre. Since 2013 he has been Deputy Director for Culture of the Holy Lavras of Orthodox Russia International Centre for the Development of Socially Important Projects. Head of the Academic Department of Children’s School of Music No. 92 (Moscow).
Information for November 2021