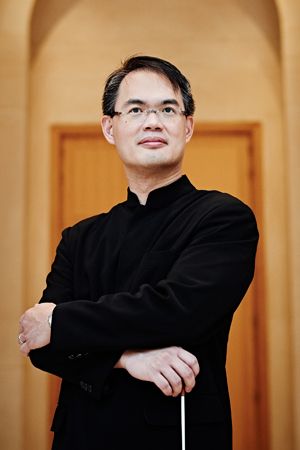 Born in Jakarta, Indonesia of Chinese descent, the Indonesian-American Wilson Hermanto’s musical training began with the piano and the violin. He graduated from the Peabody Conservatory of Music majoring in violin and pursued conducting study from the Manhattan School of Music (class of Sixten Ehrling). Sir Colin Davis became a close musical mentor who took personal interest in shaping Wilson Hermanto’s conducting skills. Wilson Hermanto was also one of the last pupils in the famous conducting class of Carlo Maria Giulini at Scuola di Musica di Fiesole in Italy, a conducting fellow at the Tanglewood Music Centre and a fellow at the invitation of Pierre Boulez to work with the  maestro at the Lucerne Festival Academy.

During the anniversary years of Gustav Mahler in 2010 and 2011, Hermanto together with the eminent Mahlerian musicologist Henry-Louis de La Grange, the mezzo-soprano Christa Ludwig, the soprano Miah Persson and the Sinfonietta de Lausanne collaborated in Mahler projects, culminating in performances of the composer’s 1st and 4th Symphonies as well as master-classes and a symposium.

In 2016 Wilson Hermanto conducted a production of Mozart’s Don Giovanni at the Mariinsky Theatre. Following his sensational debut with the Cameristi della Scala, effective December 2017 Wilson Hermanto begins his association with the orchestra as its Principal Guest Conductor. In the season 2018–19 Wilson Hermanto conducts Cameristi della Scala in France as well as in their annual Teatro alla Scala series. He also performs as a guest conductor with both the Mariinsky Orchestra and the Philharmonic Orchestra Szczecin and makes his debuts with Orquesta Sinfónica Nacional de Chile and the Bari Symphony Orchestra.