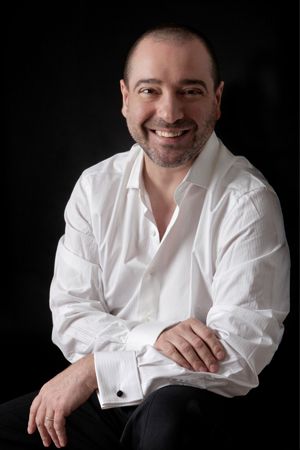 Claudio Vandelli was born in Milano in 1967, where he studied piano, clarinet and conducting. He then pursued his clarinet studies with Antony Pay and conducting with personalities such as Sergiu Celibidache or Carlo Maria Giulini. From the age of 20, part of his professional life has been devoted to recognizing young talented musicians and forming them to professional orchestral musicians.

In 1999 he has been engaged by Martin Engstroem to participate in the creation of the Verbier Festival Orchestra. He was its Director of Music Department and Music Director James Levine's assistant until 2007. Claudio Vandelli had the chance to work with a number of guest conductors in Verbier: Jiri Belohlávek, Christoph von Dohnányi, Charles Dutoit, Daniele Gatti, Valery Gergiev, Neeme Järvi, Paavo Järvi, Kurt Masur, Zubin Mehta, Kent Nagano, Gianandrea Noseda, Michail Pletnev, Mstislav Rostropovich and Yuri Temirkanov. He then formed the Verbier Festival Chamber Orchestra, and conducted their first international tour in April 2005.

Other festivals where he conducted include the Festival d'Aix-en-Provence in France, the Baden-Baden Festspiele and at the European Classic Festival Ruhr in Germany, the Minsk Music Festival, the BeMus Festival in Belgrade, the Sochi festivals in Russia and the Youth 4 Youth Music Festival in Thailand. As a guest conductor he has performed in Armenia, Azerbaijan, Belarus, Canada, Cyprus, Egypt, England, France, Germany, Israel, Italy, Latvia, Montenegro, Rumania, Russia, Serbia, Switzerland, Turkey, Ukraine, United States.

He is permanent guest conductor of the Novaya Rossiya State Symphony Orchestra in Moscow.

In 2012 a CD of the live recording of Igor Raykhelson’s Viola Concerto with Yuri Bashmet and this orchestra has been published by the British label Toccata Classics. In 2013 he took part as a conductor in the first tour of the All-Russian Youth Symphony Orchestra. In 2014 conducted a concert at the Sochi Winter Olympic Games, with Barbara Frittoli, Enrico Dindo, Massimo Mercelli and Laura Bortolotto. In 2015 conducted the Summer Night Concert of the German television ZDF, open air for the first time at Königsplatz in Munich, with Anna Netrebko, Jonas Kaufmann, Thomas Hampson, Ildar Abdrazakov and Elena Zhidkova.

Engagements for the current and the next seasons include performance of John Williams’ music on an extensive tour through Germany and Switzerland.