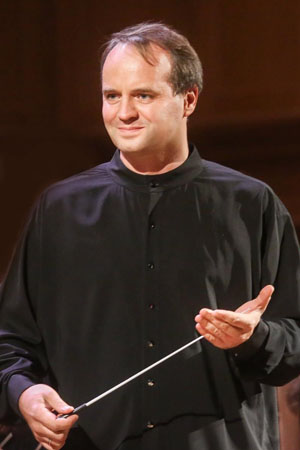 Vasily Valitov graduated from the Moscow State Tchaikovsky Conservatoire as an opera and symphony music conductor (class of Leonid Nikolayev), and trained under Fuat Mansurov and Wolfgang Scheidt (at the Wiener Staatsoper). Has collaborated with leading orchestras and music theatres in Russia, Poland, France, Spain, Austria, The Netherlands and Japan.

Since 2004 he has been Artistic Director and Principal Conductor of the Nikolayev Youth Symphony Orchestra of Russia. Under Valitov’s baton the ensemble has toured to great acclaim to Qatar (2004) and France (2006, 2008 and 2012).

From 2008–2010 he was Principal Conductor of the Astrakhan State Opera and Ballet Theatre, and from 2010 he directed the Novaya Opera theatre. Since 2013 he has been Artistic Director of the Commonwealth Talents Youth Music Festival Dedicated to Fuat Mansurov.

In 2016 he took over the CIS Youth Symphony Orchestra, which over the years has been conducted by Fuat Mansurov, Yuri Simonov and Vladimir Spivakov. Under Valitov’s direction the ensemble has given concerts in countries throughout the CIS and released two CDs.

In 2016 he founded the company The Voice of Music and a Russo-Austrian summer music school in Bregenz (Austria), in addition to becoming Artistic Director of the project Vienna-Moscow Music Academy.