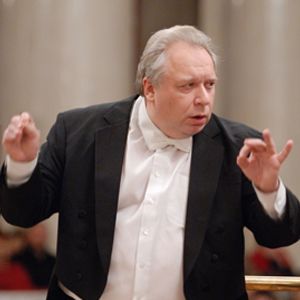 Alexander Titov graduated from the Leningrad State Rimsky-Korsakov as a pianist and choral and symphony conductor (class of Ilya Musin). Trained at the Tanglewood Music Center (USA).

In 1988 he was a prize-winner at the International Music Competition for Conducting in Tokyo. Has collaborated as an assistant conductor with Gennady Rozhdestvensky and Mstislav Rostropovich. Has been a guest conductor with the Mariinsky Theatre, the Bolshoi Theatre and the BBC Scottish Symphony Orchestra. Has appeared at the Teatro La Fenice, the Teatro alla Scala, the Metropolitan Opera, the San Francisco Opera, the Royal Opera House, Covent Garden and the Opéra de Paris. From 2007–2013 he directed the St Petersburg State Academic Symphony Orchestra. Regular participant at festivals including the Stars of the White Nights, From the Avant-Garde to the Present Day, St Petersburg Musical Spring and the MARIINSKY ballet festival. Has recorded over eighty discs.

Head of the department of opera and symphony conducting at the St Petersburg State Rimsky-Korsakov Conservatoire. Honoured Artist of Russia and recipient of the Golden Sofit, St Petersburg's most prestigious theatre prize.