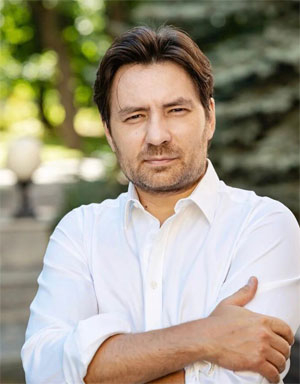 Mikhail Tatarnikov was born in Leningrad in 1978. Graduated from the Rimsky-Korsakov St Petersburg State Conservatory (class of Alexander Polishchuk).

He was Valery Gergiev’s assistant throughout a run of Wagner’s tetralogy Der Ring des Nibelungen at the Metropolitan Opera. Has been a production conductor at the Opéra de Monte-Carlo (Prokofiev’s The Gambler), the San Francisco Opera (Věc Makropulos by Janáček) and the Gran Teatre del Liceu in Barcelona (The Demon by Rubinstein).

From 2012 to 2018 he was Music Director and Principal Conductor of the Mikhailovsky Theatre. In 2013 he conducted the Russian premiere of Britten’s opera Billy Budd, staged by Willy Decker at the Mikhailovsky Theatre, while in December 2013 and January 2014 he conducted the world premiere of Ratmansky’s ballet Serata Ratmansky at the Teatro alla Scala. In August 2020 he appeared at the centenary Salzburg Festival.

In 2013 he received the Golden Sofit award “For theatrical expressiveness in decisions as a conductor”; in 2016 he received the Tchaikovsky memorial dedication medal and diploma “For a contribution to the development of music in Russia”.
Information for September 2020