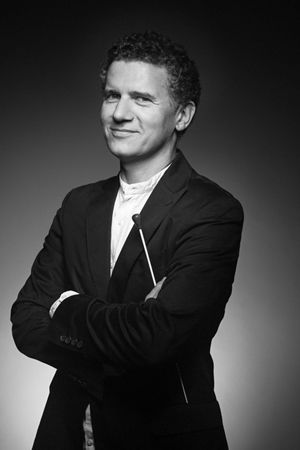 Alexis Soriano is among the most outstanding Spanish conductors of his generation. A pupil of Ilya Musin in St Petersburg, he launched his career with the Hermitage Orchestra, which he conducted regularly from 1998 to 2008, and with the St Petersburg Symphony, starting in 2001.
He took part in the film The Master and His Pupil at the request of maestro Gergiev, and later made his Mariinsky Theatre debut in 2007. He was also Principal Conductor of the INSO-Lviv Symphony Orchestra in Ukraine from 2010 to 2012, while since 2012 he has been Artistic Director of the New York Opera Society. As a symphony music conductor he has led such world-renowned orchestras as the Mariinsky Orchestra, the St Petersburg Symphony, the Prague Symphony, the Slovakian Philharmonic, the Lithuanian National Symphony, the Filarmónica de Buenos Aires, the Tapiola Sinfonietta (Finland), the Oulu Symphony Orchestra (Finland), the English Chamber Orchestra, the Cláudio Santoro Symphony Orchestra of Brasilia’s Teatro Nacional, the St Petersburg Cappella, the orchestra of the Teatr Wielki in Poznań, the Moscow Virtuosi, the Hermitage Orchestra, the Danubia Zenekar from Hungary, the Dnepropetrovsk Symphony, the National Symphony of Macedonia, the St Christopher Orchestra of Vilnius, the Orchestra Sinfonica di Grosseto and the Orchestra Regionale del Lazio as well as the majority of Spanish orchestras.
In 2014 he toured Japan for concerts with the Seto Philharmonic, the Okayama Symphony and the University of Tokyo Symphony Orchestra, receiving high praise for his performances of de Falla and Debussy and being invited again for subsequent seasons.
He has also appeared at the Teatro Real (Madrid), the Teatro Colón, the Palau de Valencia, the Gran Teatre del Liceu, the Auditorio de Tenerife, the Lithuanian National Opera, the Rimsky Korsakov Theatre, the St Petersburg Chamber Opera Company and the Hermitage Theatre (St Petersburg), conducting such operas as Rigoletto, Faust, Boris Godunov, La Fille du Régiment, Le nozze di Figaro, Madama Butterfly, Eugene Onegin, Falstaff, Glaura y Cariolano, La scala di seta, L’arbore di Diana, Everardo II, re di Lituania and Il barbiere di Siviglia.
He has also conducted premieres of operas by Wilfried Junge, Agustín Castilla-Ávila and Ricardo Llorca.
In 2013 he was presented with the 100 Spaniards prize, which celebrates outstanding Spanish artists, scientists and entrepreneurs for their contributions to “brand Spain”. In May 2014 he received the prize of the Čiurlionis Foundation in Lithuania for his achievements in music.