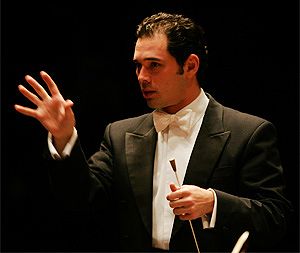 Since 2005 Tugan Sokhiev has been a conductor at the Mariinsky Theatre where he has performed premieres of productions of the operas Il viaggio a Reims, Carmen and The Tale of Tsar Saltan. At the start of the 2008-09 season Tugan Sokhiev became Musical Director of the Orchestre national du Capitole de Toulouse; previously, for several years he had been Principal Guest Conductor and Artistic Director of that orchestra. The ensemble’s first recordings on the Naïve Classique label (Tchaikovsky’s Fourth Symphony, Musorgsky’s Pictures at an Exhibition and Prokofiev’s Peter and the Wolf) received rave reviews in the press. Their most recent release including Stravinsky’s The Rite of Spring and Firebird was released in January 2013. Since 2010 Tugan Sokhiev has also been Principal Conductor of the Deutsche Symphonie-Orchester Berlin. On 20 January 2014 Tugan Sokhiev was appointed Music Director and Principal Conductor of the Bolshoi Theatre of Russia (Moscow).
Tugan Sokhiev has conducted a series of concerts in Vienna, Ljubljana, Zagreb, San Sebastian and Valencia as well as in various towns and cities in France, Germany, Austria, Croatia, Spain, China and Japan. In 2002 Tugan Sokhiev made his debut at the Welsh National Opera (La Bohème), followed by his Metropolitan Opera debut in 2003 (Eugene Onegin). The same year, the conductor appeared for the first time with the Philharmonia orchestra in London, performing Rachmaninoff’s Second Symphony. The concert received lavish praise from the critics and marked the start of Tugan Sokhiev’s close collaboration with that orchestra. In 2004 the conductor took the audience favourite The Love for Three Oranges to the Aix-en-Provence Festival, and it was also performed to great acclaim in Luxembourg and Madrid (Teatro Real), while in 2006 at the Houston Grand Opera he presented the opera Boris Godunov, also proving a tremendous success.
In 2009 the conductor made his debut with the Wiener Philharmoniker. In recent concert seasons Tugan Sokhiev has conducted the operas The Golden Cockerel, Iolanta, Samson et Dalila, The Fiery Angel and Carmen at the Mariinsky Theatre as well as The Queen of Spades and Iolanta at the Théâtre du Capitole de Toulouse. In July 2011 he conducted the opera Aida with the Orchestre national du Capitole de Toulouse at the Chorégies d’Orange festival. The conductor currently frequently appears on tour throughout Europe, performing as a guest conductor in cities including Strasbourg, Montpellier and Frankfurt. He works with ensembles such as the Swedish Radio Orchestra, the Vienna Radio Orchestra, the Frankfurt Radio Orchestra, the Royal Philharmonic Orchestra of Stockholm, the Oslo Philharmonic Orchestra, the Munich Philharmonic Orchestra, the Royal Concertgebouw Orchestra, the Orchestre de Radio France, the Orchestre national de France, the Finnish Radio Orchestra, the Deutsche Symphonie-Orchester (Berlin), the Bournemouth Symphony Orchestra and the orchestra of the Bayerische Staatsoper (Munich). Tugan Sokhiev’s debuts with the Rotterdam and Berlin Philharmonic Orchestras were hailed by the critics as a “Dirigentenwunderwaffe”, or “miracle conductor”. Highlights of recent seasons also include successful performances with the Orquesta Nacional de España and the RAI Orchestra (Turin) as well as a series of concerts at the Teatro alla Scala. Moreover, Tugan Sokhiev has performed as a guest conductor with the Orchestra of the Accademia Nazionale di Santa Cecilia (Rome), the Arturo Toscanini Symphony Orchestra, Japan’s NHK Orchestra and the National Philharmonic Orchestra of Russia.
Plans for this season include debuts with the Chicago Symphony and Leipzig Gewandhaus orchestras and returns to Vienna Philharmonic and Rotterdam Philharmonic. He also conducted two contrasting programmes with the Philharmonia Orchestra - to which he returns each season - including the RPS 200th anniversary celebration concert at the Royal Festival Hall. Opera includes his return to Vienna State Opera for Boris Godunov and a Stravinsky ballet project at Theatre du Capitole. Highlights with titled orchestras include his inaugural concert at the Berlin Musikfest with DSO Berlin and European and Asian touring with ONCT.