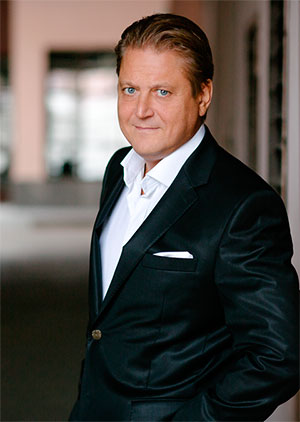 Alexander Sladkovsky was born in 1965 in Taganrog. Graduated from the Military Conducting Faculty of the Moscow State Tchaikovsky Conservatory and the Rimsky-Korsakov St Petersburg State Conservatory (class of Vladislav Chernushenko).

Since 2010 he has been Artistic Director and Principal Conductor of the Tatarstan National Symphony Orchestra. In 2016 the orchestra presented concerts at the Brucknerhaus in Linz and the Musikverein in Vienna. December 2018 featured a tour to China, while in 2014 (in Japan) and in 2019 (in France) the orchestra participated in the festival La Folle Journée.

In the 2014–15 season Alexander Sladkovsky and the Tatarstan National Symphony Orchestra appeared at the Bolshoi Theatre of Russia (as part of an anniversary concert commemorating ten years of the Crescendo festival) and the Concert Hall of the Mariinsky Theatre.

In 2012 the ensemble released An Anthology of Music by Composers of Tatarstan and the album Enlightenment (featuring Tchaikovsky’s Manfred symphony and Rachmaninoff’s Isle of the Dead) on the labels Sony Music and RCA Red Seal, while in 2016 with Melodiya it recorded the First, Fifth and Ninth Symphonies by Mahler and all of Shostakovich’s symphonies and instrumental concerti. A recording of all of Tchaikovsky’s symphonies and instrumental concerti will be released in the spring of 2020 on the Sony Classical label.

In 2016 Alexander Sladkovsky was awarded the prize Conductor of the Year from the Moscow newspaper Muzykalnoe Obozrenie (The Musical Review) and the award Man of the Year in Culture from the magazine Delovoi Kvartal (Business Quarter) and the e-magazine Business Online. In 2019 he received the Sergei Rachmaninoff International Award in the category “Special project in the name of Rachmaninoff” for his particular focus on the composer’s music and for organising the White Lilac festival in Kazan which is dedicated to him.

In the autumn of 2019 he founded an annual personal scholarship at the Moscow Conservatory for students of the Opera and Symphony Conducting Division.
Information for March 2020