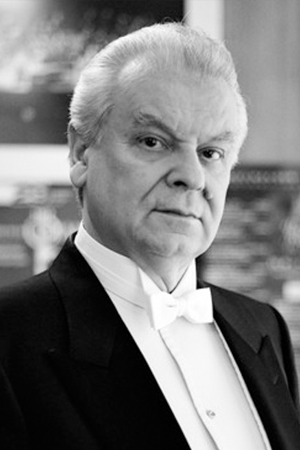 Yuri Simonov completed his undergraduate studies in 1965 as a viola student of Yuri Kramarov and as a conductor in the class of Nikolai Rabinovich (1969) at the Leningrad Conservatory. In 1966 he won a prize at the All-Union Competition, and in 1967 he was invited to the Kislovodsk Philharmonic as Principal Conductor. Honorary Professor of the St Petersburg Conservatory.

In 1968 Simonov became the first Soviet conductor to win the International Competition of Orchestra Conductors at the Accademia Nazionale di Santa Cecilia (Rome, Italy). Shortly thereafter, Yevgeny Mravinsky invited him to become an assistant conductor with the Leningrad Philharmonic.

In the 1980s and 1990s Simonov performed with the most prominent symphony orchestras of Europe, the USA, Canada and Japan. He participated in many international festivals and staged a number of operas at the world’s great theatres. In 1982 he made his debut at Covent Garden (London, UK) with Eugene Onegin, followed four years later by Verdi’s La traviata. He subsequently appeared with Mozart’s Così fan tutte (Genoa, Italy), Richard Strauss’ Salome (Florence, Italy), Musorgsky’s Khovanshchina (San Francisco, USA), Tchaikovsky’s The Queen of Spades (Paris, France) and other Verdi operas such as Aida (Birmingham, UK), Don Carlo (Los Angeles, USA, and Hamburg, Germany) and La forza del destino (Marseilles, France).

In the early 1990s Yuri Simonov was Principal Guest Conductor of the Orquesta Filarmónica de Buenos Aires (Argentina), and from 1994 to 2002 he was Music Director of the Belgian National Orchestra (Brussels). In 2001 he founded the Liszt-Wagner Orchestra in Budapest. He has been a guest conductor at the Hungarian State Opera for more than thirty years. Since 1998 Yuri Simonov has been Artistic Director and Principal Conductor of the Moscow Philharmonic.

In addition to his concert activities, maestro Simonov has always been a dedicated teacher for young conductors. From 1978 to 1991 Simonov was a professor of opera and symphonic conducting at the Moscow State Conservatory; since 2006 he has been a professor at the St Petersburg Conservatory and, since 2009, at the Ippolitov-Ivanov State Musical Pedagogical Institute.

Professor Yuri Simonov is a People’s Artist of the USSR, Honorary Professor of the Saratov State Conservatory and winner of the Government of Moscow Award for Literature and Culture. He has received the Order for Services to the Fatherland (III and IV class) and Orders of Honour from Russia, Poland, Hungary and Romania.
Information for October 2019