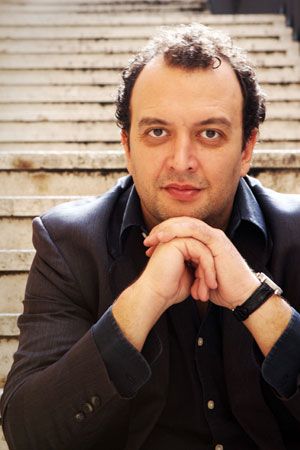 Mattia Rondelli is an Italian conductor of international renown. His engagements have taken him to some of the most important venues in Italy, Switzerland, the UK, Russia, the USA and China. His versatility as a conductor has resulted in performances of works from both the operatic and orchestral repertoires ranging from early music to pieces by contemporary composers. In recent years Rondelli has attained sensational success, particularly since meeting Valery Gergiev and his collaboration with the Mariinsky Theatre.
In 2011 Rondelli was invited to conduct a concert featuring Barbara Frittoli along with the Mariinsky Orchestra, Chorus and soloists at the Stars of the White Nights festival. This included a performance of certain sacral works by Giuseppe Sarti, an Italian composer who deeply influenced Mozart and, having spent almost twenty years at the Russian Imperial Court of Catherine II, may be considered one of the founding fathers of Russian music traditions. A live recording of that concert was released internationally by SONY Classical, which previously released a live recording of Boccherini’s Stabat Mater featuring Barbara Frittoli as soloist and Mattia Rondelli conducting the Virtuosi del Teatro alla Scala. This recording was extremely well received by the press.
In Italy, Rondelli is a regular guest conductor at the MITO SettembreMusica festival, the second largest festival in Europe after the BBC Proms. Recently he made his debuts with Italy’s Teatro Regio in Turin and the Chicago Philharmonic. He also appeared with the Virtuosi del Teatro alla Scala, the Arturo Toscanini Symphony Orchestra, the Orchestra di Padova e del Veneto, the orchestra of the Teatro la Fenice, the orchestra of the Festival Settimane Musicali di Stresa e del Lago Maggiore, the Orchestra Filarmonica Marchigiana, Pomeriggi musicali di Milano, the Orchestra Filarmonica di Torino, the Orchestra giovanile di Roma, the National Opera Orchestra of Beijing, the Chicago College of Performing Arts Symphony Orchestra, the Maestri Orchestra in London and the Orchestra Cantelli di Milano. In 2011 Rondelli rejoined the St Petersburg Philharmonic, while in 2010 he made his debut at Zankel Hall at Carnegie Hall in New York, having previously conducted the Civic Orchestra of Chicago with Barbara Frittoli in Berlioz’ Les Nuits d’été. The same year, he made his debut with the Orquesta Sinfónica Nacional in Peru with Mahler’s Sixth Symphony.
Following his piano studies, Rondelli earned degrees in both orchestral conducting and music composition from the Conservatorio di Milano. Piero Bellugi, Jorma Panula and Donato Renzetti have been particularly important mentors in his career as a conductor. In addition to his musical education, Rondelli holds a degree in law.
Mattia Rondelli is a SONY Classical recording artist.

For further details about the musician please go to: www.mattiarondelli.com.