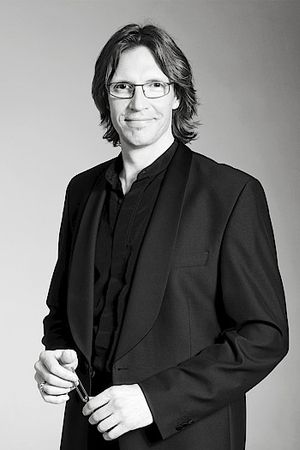 Kaspars Putniņš was appointed Artistic Director and Principal Conductor of the Estonian Philharmonic Chamber Choir in September 2014. He has been a conductor of the Latvian Radio Choir since 1992. In 1994, he formed the Latvian Radio Chamber Singers, an ensemble of soloists formed from the members of the Latvian Radio Choir. He regularly appears as a guest conductor with leading European choirs such as the BBC Singers, the RIAS Kammerchor, the Estonian Philharmonic Chamber Choir, the Berliner Rundfunkchor, the NDR Kammerchor, the Netherlands Radio Choir, the Collegium Vocale Gent and the Flemish Radio Choir among others.
Whilst Kaspars Putniņš’ work encompasses a wide range of choral repertoire from Renaissance polyphony to works of the Romantic period, his foremost goal has always been that of promoting new outstanding choral music. This new repertoire challenges and develops the abilities of his performers and takes their vocal sound to entirely uncharted territories.
Kaspars Putniņš has also initiated several theatre projects, which involve the participation of his choir, in collaboration with visual and theatre artists. He often lectures and gives master-classes internationally.
Kaspars Putniņš is the recipient of the Latvian Music Grand Prix and the Latvian Council of Ministers’ Award for Achievements in Culture and Science.